SINGLES  is a dead-on, like-real-life comedy gem from 1992, written and directed by Cameron Crowe. Nicely shot on locations in Seattle, it follows the hopeful/fatalistic pursuit of Love & Happiness from a group of mid-20s characters, all readily identifiable from personal experience (mine, anyway).  “I think that a) you have an act, and that, b) not having an act is your act.”

The music they rock to might not be to everyone’s taste, but the relationship dilemmas are a constant (since Bible times, I suppose), with the then-fresh approach (were the 90s that long ago?) in scripting and editing making for lots of fun.

Excellent work from the whole cast, with special nods to Campbell Scott and Kyra Sedgwick. Others on view are Bridget Fonda, Matt Dillon, Sheila Kelley, Jim True-Frost, Bill Pullman, James Le Gros, Paul Giamatti (with one line consisting of one word), Jeremy Piven, Ally Walker and Tim Burton. There are cameos from Eric Stoltz, Peter Horton and Tom Skerritt, and musical appearances from Pearl Jam, Soundgarden and Alice in Chains.

The little movie took in twice its $9,000,000 cost, and the soundtrack was a bestseller for three months. Crowe insists that the TV series Friends was inspired by this 99-minute foray. Let’s hear it for “Citizen Dick”! 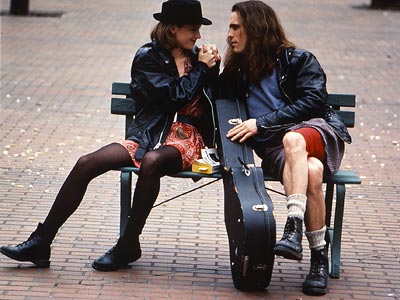