HISTORY OF THE WORLD–PART 1—-directed, written and produced by Mel Brooks, was an eagerly anticipated comedy wallop that is appallingly bad, in execution as well as taste. Bad taste was to be expected, since that’s Mel Brooks’ forte, something he riotously pulled off in Blazing Saddles, but the vulgarity that brought belly-laffs before became simply obscenities this time, producing quease and embarrassment.  It’s not that the gags are merely filthy, they’re witless—like a gang of smartass 7th-graders might conceive after their first gallon of cheap wine.

Brooks defecates over Mankind from the Stone Age up through the Roman Empire, into the Spanish Inquisition and French Revolution. There are maybe fifteen chuckles in 92 minutes, courtesy of Harvey Korman as a Parisian fop (‘Count de Monet’), Dom DeLuise as Nero and the legendary Shecky Greene as a centurion. 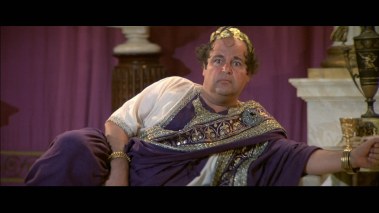 But overwhelmingly, it’s Brooks, giving every second-rate standup comic he knew a chance to leer, mince, mug and out-shtick each other in gaga not only tired, forced and frantic but so grossly sexist that if you see it with a romantic partner it could ruin your chances at fun for a week.  Swarming through, dropping smarmy one-liners about things like rape, torture and ever-popular subject of shit are Gregory Hines, Pamela Stephenson, Ron Carey, Mary-Margaret Hume, Madeline Kahn, Sid Caesar, Howard Morris, Beatrice Arthur, Charlie Callas, Cloris Leachman, Rudy DeLuca, Paul Mazursky, Art Metrano, Leigh French, Fritz Feld, Jackie Mason, Pat McCormick, Henny Youngman, Art Metrano, Jack Carter, Jan Murray, Spike Milligan, John Hillerman, John Hurt (as Jesus) and Hugh Hefner, with several Playboy Bunnies some of you might recognize from your studies.  Orson Welles did the narration.

Not nearly as lovable as he thinks.

While he did a notably rotten job as writer and director, Mel did make his credit as producer count, seeing that everything looked classy: the art direction in particular, with one set of a dungeon that is really astounding (they spent a million bucks on this one set).