INFERNO  is a neat little agate of melodrama from 1953, put together with some smarts and crisp professionalism. Rhonda Fleming is the wife of millionaire Robert Ryan, but she and her lover (William Lundigan) want Bob to get lost. Permanently.

“I think he’s always had the fear that without his money he’d be nothing, helpless.”

They leave him, with a broken leg and a useless car, in the middle of the Mojave Desert, over 80 miles from anything but a coyote or rattlesnake. Vengeance fuels the man’s fight to survive and it makes for a tight 83 minutes, directed by Roy Ward Baker (A Night To Remember). Quoting Baker: “I had always had an ambition to make a picture in which the leading character spends long period alone on the screen, where the interest would be in what he does, rather than what he says.” 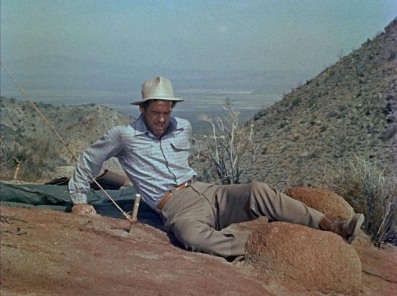 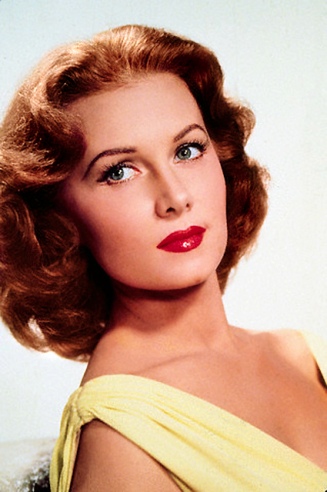 Break my leg. Leave me in the desert. I don’t care.

Ryan is fine as always, most of his dialogue being voice-overs of his character’s thoughts. He considered this—“a little picture nobody ever heard of”—one of his best pieces of work. Ms. Fleming and Lundigan are low-key plotters, the script by Francis Cockrell is good, with a great twist finale. Beautiful cinematography from Lucien Ballard (The Wild Bunch). Originally in 3-D, the film grossed $3,000,000, but that only put it 131st place among the year’s releases. With Larry Keating, Henry Hull and Carl Betz.