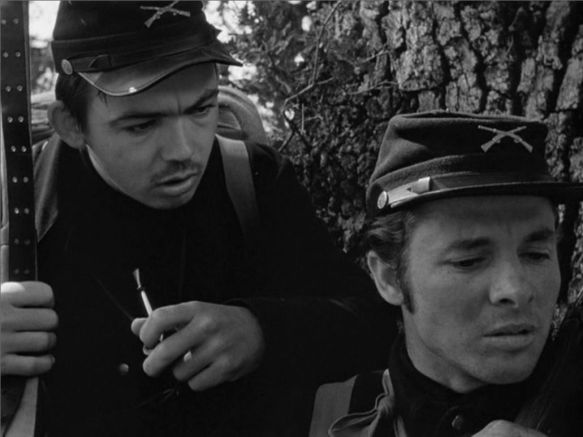 THE RED BADGE OF COURAGE  captured maverick director John Huston’s imagination not just as a famous piece of homegrown literature but as a vehicle that could serve for an oblique expression of the idea of ‘courage under fire’, a concern of Huston’s since his sobering experiences in WW2 , and to mirror his distress over the blacklisting then under way in Hollywood.

After a disastrous 1951 premier of the 135-minute cut, where audiences laughed and walked out, the studio execs took over and butchered the print down by over an hour, to 69 minutes. Stunned by the reaction, disgusted by the meddling, Huston left for the Congo to embark on The African Queen.  In general release, despite being dumped on a double-bill, the truncated edit drew excellent reviews, so MGM burned the scenes that had been cut—according to featured actor Royal Dano, “to make sure nobody would know what a horrible mistake they made.”

It’s been said L.B. Mayer helped sabotage the preview, to spite MGM Vice-President Dore Schary in a power struggle.  This kind of dicking around also gutted the same years much-anticipated Across The Wide Missouri, despite it’s big budget, big director (William Wellman) and big star (Clark Gable).  Message from Corporate to Talent: don’t plan on winning.  That ‘Courage’ went over a million in-the-hole became secondary to whose cigar was lit first.

One can only speculate on what went: what’s left is brilliant.  Hollywoodian temptations to make Stephen Crane’s book a star-studded spectacle were tremendous, but Huston wisely wanted the story to speak for itself, so he chose actors fresh and unfamiliar to the public, even, in the case of famous cartoonist Bill Mauldin, picking someone with no acting experience.

In effect, he shot the movie in his own back yard, as most was filmed on wooded, hilly acreage he owned in Calabasas, California.  Cameraman Harold Rosson achieved a kind of bleached effect reminiscent of Matthew Brady photographs from the Civil War, with beautifully rendered close-ups of the cast and vivid coverage of the thundering, large-scale battle action: smoke-choked, exhilarating charges and panic-stricken routs that Huston staged superbly. 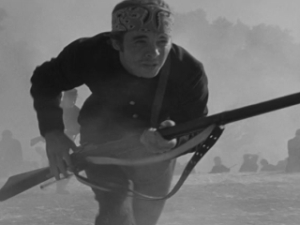 The script (what’s left), written by Huston and Albert Band, does a wonderful job of making the tempo and simplicity of the small-talk among the soldiers seem natural and immediate instead of stilted and archaic. To cover holes left by the editing, the studio added narration by James Whitmore.  Bronislau Kaper provides a rousing music score.

The real coup was the casting: everyone is completely credible and fit the mold as naive, honest rural ‘fellers’ about to be thrust into the jaws of death. Mauldin turned out to be a natural: it’s a loss he only acted in one more film after this (Teresa, for Fred Zinnemann) –he didn’t care for show biz.

It’s always fun to see Arthur Hunnicutt and Andy Devine, as well as one of the most adept–and least used–character actors of the 50s, the gaunt John Dierkes, great here in only his third part.  Royal Dano, likewise just two years into the business, would go on to a lengthy career playing offbeat types ranging from kindly to fanatic. Most of his performance ended up on the discard reel, and the word at the time was his work as ‘The Tattered Man’ would certainly have garnered a Supporting Actor nomination (the movie received none).

Front and center is the frightened coward/champion of the piece, the movies star, an authentic hero and anything but frightened—Audie Murphy. With a handful of minor cowboy outings on his resume, Murphy’s fame as the most decorated American soldier of WW2 would seem at complete odds playing a guy who would run from gunfire.  But Huston saw something in the edgy, damaged vet, still boyish at 27.  He drew one of Murphy’s two best performances: the other also came through Huston, nine years later in The Unforgiven.  He’s nothing less than excellent here, and the camera scanning his face says more about conflict than all the emoting of a dozen ‘stars’ could have telegraphed.

Wounded in action or not, this is a classic. With Douglas Dick, Robert Easton, Whit Bissell, William Schallert.  Lost in the mob, a whippersnapper named Strother Martin, in his fourth rung up the ladder. 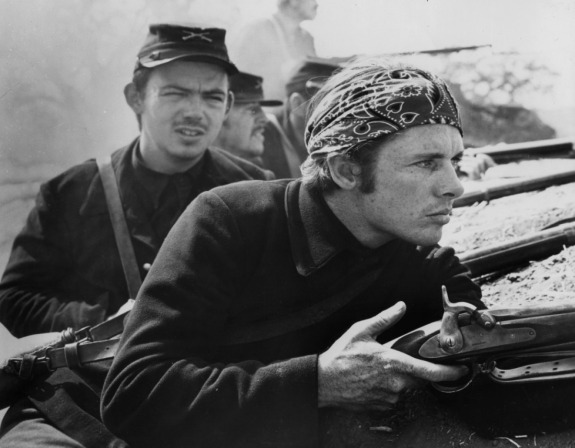 Mauldin and Murphy, new to acting, but not to war