There must be a peace march coming up

THE FBI STORY  was given the blessing and whole-hearted cooperation of J. Edgar Hoover, which ought to tell you how accurately it represents things. Warner’s gave decent production values to director Mervyn LeRoy, who smoothly handles the setups provided by the shallow script (and the lurking Hoover). Good camera work from Joseph Biroc and another of Max Steiner’s boisterous marches decorates the soundtrack. Coming out in 1959, the 149 minute sleuth-salute did decent  business, 23rd for the year, something like $10,000,000.  Plenty of play on TV over the next decade. 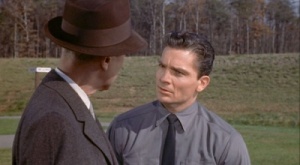 I didn’t touch her! Where’s my parachute?

James Stewart links the alternately vigorous or sluggish vignettes that tell the ‘story’, as the lead investigator (he covers an awful lot of ground) whose family story parallels thirty-five years of the departments development. From handling the Klan ( tell me another one) in the 20s, then helping Oklahoma Indians being cheated out of their oil royalties, riddling famous Midwest gangsters in the 30s, foiling Nazi’s in South America and finally pursuing sneaky Commies in the 50s, the Feds “make the World a safer place“, according to the movies postscript.  Never mind the Mafia. Too bad they didn’t wait a few years so they could ‘dramatize’  all the swell work Hoover’s suits did to the Civil Rights Movement, sabotaging the anti-war protests and blackmailing everyone from Pontius Pilate to Mickey Mouse.

Stewart’s fine (like always), pitching softball for the Feds, pretty Vera Miles nicely plays his wife. Their home front issues are pat.  Larry Pennell got a good break and brings some handsome vigor to his scenes. The shoot was a two-edged sword for the on-the-rise actor, as LeRoy somehow got it into his egotistical head that Pennell was romancing some starlet he had his designs on, and made life on-set miserable.  At least Pennell got to participate in ‘Hogan’s Alley’ (if you’ve seen it, you know what I’m referring to). Lookin’ good, Bud…

The action vignettes are fairly nifty examples of what used to be called ‘gunplay’—highlighting hoods so familiar to generations of Americans that they didn’t need much prep info—Dillinger, Baby Face Nelson, Pretty Boy Floyd, Machine Gun Kelly, Ma Barker.  Busy character actor William Phipps has the best bit as Nelson: his barking “You too, Uncle Fudd!” at old Burt Mustin always cracks me up.

The movie is a total whitewash, bogus as can be, amusing to watch as a time capsule of propaganda and yeoman studio dependability. With Murray Hamilton, Nick Adams, Diane Jurgens, Joyce Taylor, Victor Millan, Parley Baer. 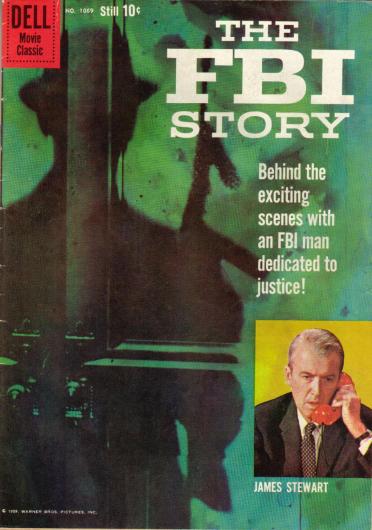 Possibly more accurate than the film