THE GREAT NORTHFIELD MINNESOTA RAID  shows that in the 1970s, the western wasn’t dying: it was being kicked to death, one nasty revisionist stomp after another, and this 1972 villain was guilty of joining in the attack. 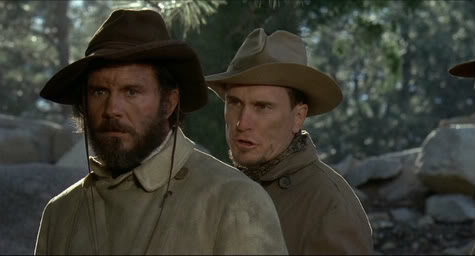 Jesse James remains America’s most celebrated outlaw. On screen he’d been idealized by Tyrone Power, Robert Wagner and a host of other handsome types, so this go-round, coming in the midst of Nixon, ‘Nam and Nilsson, director/writer Philip Kaufman pole-axes Jesse with a grungy, Bible-thumpin’, rednecked Robert Duvall.  Cliff Robertson works decently at Cole Younger and the cast is peppered with familiar character scenery chewers like R.G.Armstrong, Luke Askew, Donald Moffat—even old hands Elisha Cook and Royal Dano, perhaps as a backdoor bow to (movie) tradition.

But the story as told here is full of as many holes as ‘ol Cole was after he finished the title bank job (talk about tough!–he was hit eleven times). It’s an ugly film visually, and the piss-on-it feel imparted says more about the era it was filmed than the one it purports to describe, from the Led Zeppelin haircuts to the depiction of women as grab & seize objects. Loot came to $2,300,000, 105th place for the year.

There are four better versions you could pull out of the holster: 1939’s seminal Jesse James, 1957’s okay The True Story of Jesse James, the stylish 1980 blast The Long Riders ,or the elegiac The Assassination of Jesse James by the Coward Robert Ford, from 2007.  Between them, those variations on the truth v.legend of Jesse Woodson stage-manage the nostalgia, excitement, flavor, and danger that this effort sheds like a muddy duster.