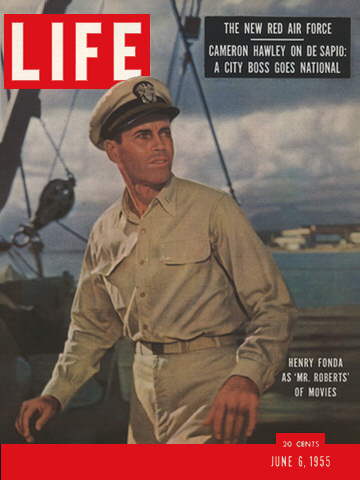 MISTER ROBERTS  was a huge hit in 1955, #2 at the box office, and was nominated for Best Picture. Viewed now, it seems much of the success was due to audience familiarity with its pedigree, perhaps also swayed by the prevailing zeitgeist of the Republic.

Fonda had a fairly ballsy Navy war record, as did director Ford.  Pacific theater for real.

Already famous as a novel and as a long-running play, with director John Ford a moviemaking legend, this sailed smack-dab into the middle of the peaceful, prosperous Ike years, when there was a surge of generational nostalgia going in the audience who’d lived through World War Two.  Flank it with big hits Battle Cry (#3) and To Hell and Back (#8) as well as the Americana of Oklahoma (#4) and The Tall Men (tied for #8). Throw in Picnic and Davy Crockett. *

In that red, white & true-blue arena, this reassuring comedy-drama about the crew of a cargo ship battling not the Japanese but their petty captain and service monotony struck the right chord of shared experience. Sentiment stowed: aside from the four solid lead performances, its pacing drags and Ford’s handling of the supporting cast is way too broad.   Seven years away from the movies, Henry Fonda was brought in at Ford’s insistence (the studio wanted Brando or Holden to insure box-office), not only because they were pals who’d had a terrific run of hits together but as a spirit with the piece, since Fonda had basically made the part his own in its marathon Broadway run.

Alas, enter Time and Tide.  Interpretations and egos clashed from the get-go, fuming culminated in Ford-Fonda fisticuffs which not only soured the shoot, but put the kibosh on sixteen years of drinking escapades, classic movies and Navy service brotherhood.  Mervyn LeRoy and Joshua Logan patched and re-shot holes after ailing, depressed and pickled Ford left the production.

Fonda is quietly steady as Roberts, but to me the character was always too distant to evoke the kind of aura around him we’re asked to feel.   James Cagney bristles and blusters amusingly as the captain, and William Powell, in his last screen role, is effortlessly droll as the Doc.  Stealing the thunder, and copping a Supporting Actor Oscar is Jack Lemmon, in a career-making gift as Ensign Pulver: his fresh energy lights up every scene he’s in.

Except for launching Lemmon into stardom, the experience for almost everyone involved with the making of the film was one of regret.  Fonda, understandably proprietary about the the property, bitterly despised the results.  The take-no-guff Cagney and dish-it-out Ford had less than gracious feelings toward each other and Jimmy also had something against Mervyn LeRoy from way back.  Josh Logan, who steered it on the stage, was outraged by Ford’s tampering.  Powell, having trouble remembering his lines, fed up with show business, quit acting and happily retired to Palm Springs, where he lived until he passed away in 1984, at 91.

The not so happy crew

The success of the play and film had a bit of an attached curse already, as Thomas Heggen, who wrote the original best-selling novel based on his WW2 naval reminisces, ended up so overwhelmed by fame and daunted by the pressure to follow it up that he overdosed on pills and drowned in a bathtub. He was only thirty years old.

Beyond Lemmon’s deserved win, and the Picture nomination, the only other nod was for Sound (snagged by Oklahoma) as the film just didn’t warrant them, which brings its Best Picture inclusion in line with musing about the movie-mood of the time.  In what may have twisted Ford’s kerchief another bit, his steering of this vessel was denied, while Logan’s frustration over the result was tempered by his nomination for directing the Picnic slice of American pie.  Ask people and they will say “Oh, yeah, Mister Roberts was ‘nice'”, but beyond Lemmon’s shenanigans that’s pretty much it: not great, just nice. 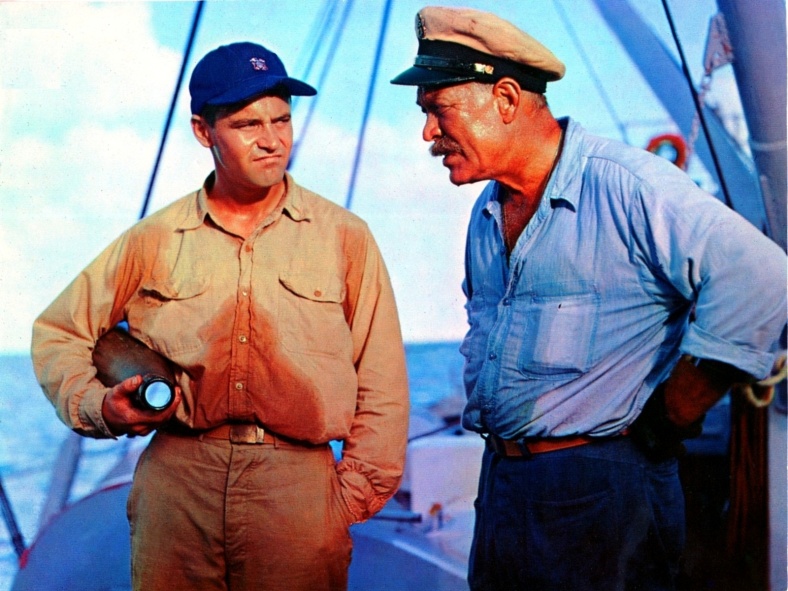