YESTERDAY, TODAY AND TOMORROW  justifiably won the Best Foreign Film Oscar for 1964, the Italian film-makers maturity about sex and adult relationships making un grande scherzo out of inane same-year US barf like Sex And The Single Girl, What A Way To Go! and Kiss Me, Stupid.

Vittorio De Sica directs wonderfully delineated comic performances from Sophia Loren and Marcello Mastroianni in three different, unrelated mini-stories about the ups and downs of amare la vita.  He backs them with swell nostalgic views of Rome and Naples in bright color from cinematographer Giuseppe Rotunno, partnered with scoring courtesy of Armando Trovajoli.

Somehow more elegant than the Anderson’s down the block

Watching the delightfully expressive, remarkably open Loren flex her acting skills in her native language is a real treat: many of her American films relied simply on her banish-mortals beauty, decent English and being blessed with a great body to drape expensive costumes on.  Here she’s allowed a full palette of mischief, earthiness, bawdiness, longing, wiles, pain and pout. 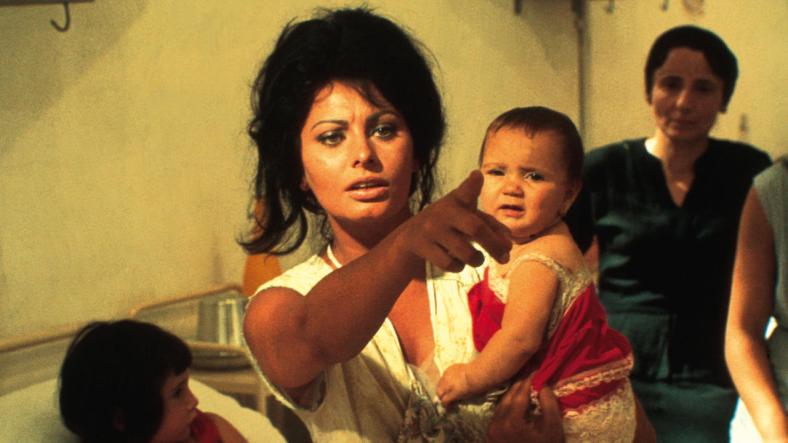 The most famous bit is the strip-tease she performs for her favorite leading man, but what’s more revealing is a small moment where one of her characters matter-of-factly breast-feeds her baby. You can’t help but marvel if any American actress of the day would have the confidence to pull that off, even if the paleolithic censors would go near it (too busy covering up Annette in Muscle Beach Party).  119 minutes of period-flavor fun.

Don’t let me stop you