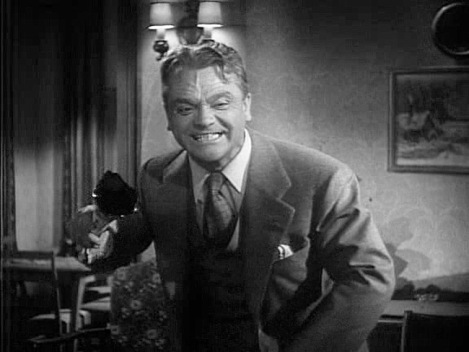 KISS TOMORROW GOODBYE saw James Cagney add another cheerfully ruthless hoodlum to his gallery of ruffians in this 1950 entry, a year after his classic White Heat turned up the dial on postwar nastiness. Like that hit’s ‘Cody Jarrett’, his ‘Ralph Cotter’ breaks the law as a profession, but he’s more cunning than Jarrett, better-educated and has greater impulse control—somewhat—while managing to juggle, deceive and bully accomplices, a shady lawyer, corrupt policemen and two simultaneous girlfriends. Add jailbreak, robbery, pistol-whipping and murders and you get a plotline that took aback critics and saw the movie, directed by Gordon Douglas, banned in Ohio as “a sordid, sadistic presentation of brutality and an extreme presentation of crime with explicit steps in commission.” 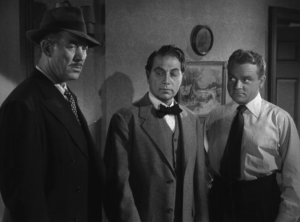 After escaping from a work camp, Ralph Cotter shacks up with the hot number sister of a fellow escapee who didn’t make it. While ‘Holiday Carleton’ (Barbara Payton) helped the break, and shot a guard in the process, she’s unaware Ralph polished off her wounded brother. Despite the fact that they fight (verbally and physically) she falls head-over-brains for Ralph. He displays smarts, charm, craft and a decided lack of empathy and remorse as he connives with and cons on-the-pad cops, a devious lawyer and innocent young heiress ‘Margaret Dobson’ (Helena Carter), who cluelessly falls for Ralph almost as readily as the less-classy Holiday. 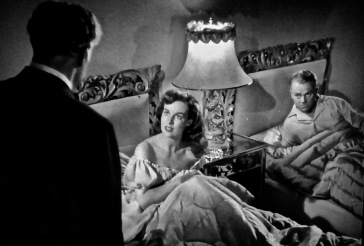 Harry Brown’s script adapted the novel by Horace McCoy (author of “They Shoot Horses, Don’t They?”) and when it sticks to the characters fencing and spatting it works well enough, and director Douglas proves most able with jolting rough stuff. The downside is the weakness of the two romantic attachments: you just have to take it on faith that the attractive young women would find Ralph a suitable mate (plus Cagney was 50, the gals in their early 20s). The abruptness of the seductions and breathless declarations toss credibility to the curb.  Neither actress shows particular skill, though Payton gets to have fun throwing objects at Jimmy (wildness was not a stretch for Miss Payton) and Carter (whose precise finishing school diction is all wrong) does look provocative lounging in a nightgown. 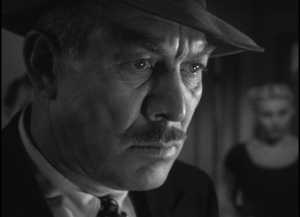 Thankfully, Cagney is still in top form, and the rest of the supporting cast is strong, with notably  excellent work from Ward Bond (the main dirty cop), Luther Adler (the lawyer) and Steve Brodie (getaway driver). While not a big hit, it did make back costs and then some, a gross of $4,900,000 placing 54th in ’50. Largely dismissed by critics at the time, the film’s rep has been rehabilitated, something that would never happen to a fella like Ralph Cotter. 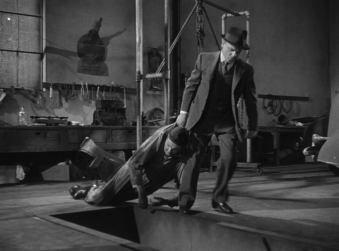 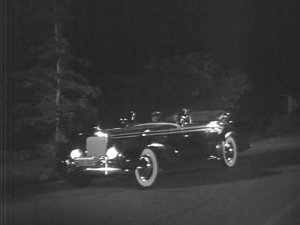 * Career moves—nine years earlier, Ward Bond and Barton MacLane played another pair of cops, tough but honest that time, in The Maltese Falcon. Better known then, MacLane had the larger part and billing, the ever-busy Bond still on the way up; by the time Kiss Tomorrow Goodbye was released, their status and clout had switched. Fresher (and definitely prettier) faces Barbara Payton, 22, and Helena Carter, 26, both had brief careers. Demure former model Carter made just 13 films (most famous is Invaders From Mars) then opted for private life, passing away in 2000. After notching 2nd-billing in this star vehicle, hard-edged party girl Payton’s career soon evaporated as her personal life spun out of control into five marriages, scandal, booze, eventually prostitution: she died at 39. 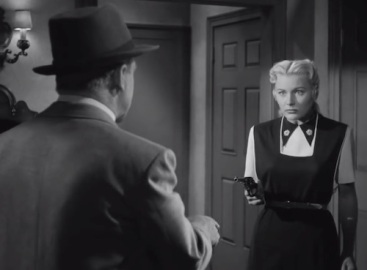 Cagney didn’t think much of the movie, calling it a “very well made bomb” (his brother William produced it), but was impressed by co-star Adler: “An absolutely terrific actor, first-rate, and I wondered why he wasn’t a star in Hollywood. I told him this once, and he pulled at his nose. Too Semitic. But I never thought so. I learned from him, and what’s more I learned from him in my own business. At which I was supposed to be an expert, and he something of a Johnny come lately.” Both Cagney brothers were impressed by director Douglas (five films that year, including the neglected and excellent State Secret), using him on two more pictures. 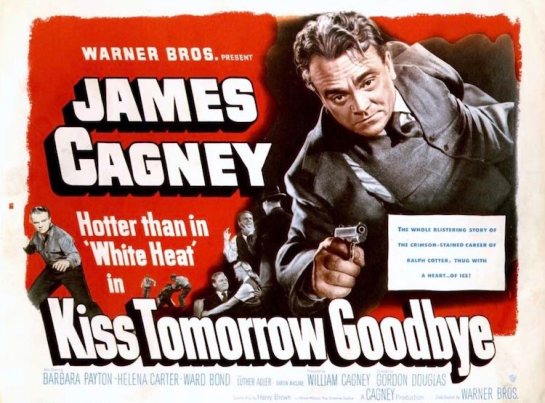