HANG ‘EM HIGH gave Clint Eastwood his first starring role in an American film, this nasty 1968 western following the European box office success of his trio of ‘Man With No Name’ epics. By the time it came out their stylish mayhem had been unleashed in the States, and this scored well in the wake. Done for a relatively cheap $1,600,000, its trendy ferocity and an ace supporting cast behind the new gun in town rode it into 26th place, grossing $14,800,000. Now Everyone Knew His Name.

Oklahoma Territory, 1889. Former lawman ‘Jed Cooper’ (Eastwood) is falsely accused of cattle rustling and murder by a vengeance-bound posse. Strung up, left for dead, he’s found and resuscitated by a marshal (Ben Johnson) who turns him over to the territorial judge (Pat Hingle) who in turn, upon proof of Cooper’s innocence, recruits him as a marshal. Though clashing over what constitutes justice, they work together, and steely Cooper goes after the men who nearly killed him. 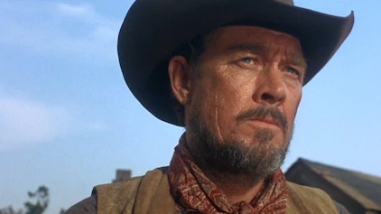 Violent and downbeat, it has a good script (written by Leonard Freeman and Mel Goldberg) with well-etched characters but the budget constraints and director Ted Post’s extensive background in TV are a debit: with the standard back-lot sets and blunt editing it looks more like a glorified pilot for a series rather a fully confident feature. The screenplay and Eastwood’s laconic ease and physical presence as a lead are greatly assisted by a durable and talented lineup of pros. To start with, any movie where Ben Johnson shoots Dennis Hopper gets a hall pass. Hingle eats up his lines as the self-righteous judge. The enigmatic main female character is played by beautiful Inger Stevens: she was having her busiest year ever, lending her charm to Firecreek, Madigan, House Of Cards and 5 Card Stud. With what she’s given to do here, she’s fine; like the rest of the people in the story, hers is an unhappy part and the resolution to her connection with the hero is perfunctory. 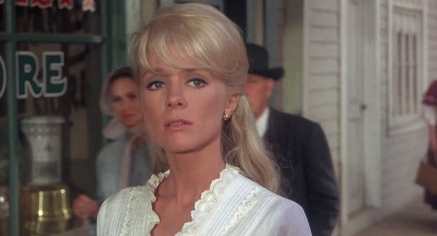 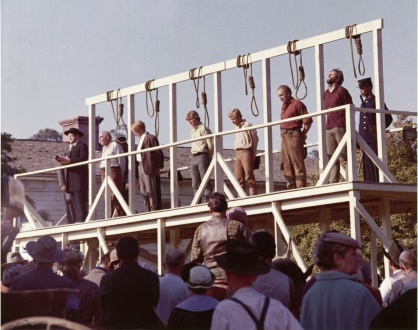