THE ADMIRABLE CRICHTON, a 1957 delight from England, was a big hit there, boosted by the popularity of stars Kenneth More and Sally Ann Howes. Upon making the Atlantic crossing to the States the title was changed to Paradise Lagoon: the suits at Columbia Pictures figured Americans unfamiliar with the source material—J.M. Barrie’s 1902 play, a plucky satire of class and social conventions—would mistake it for a war story about a naval officer. Lewis Gilbert directed and handled the adaptation, with Vernon Harris (Carve Her Name With Pride, Oliver!) writing the screenplay.

England, 1905. Though the bluff ‘Earl of Loam’ (Cecil Parker) makes a show of favoring class equality, he’s fazed with scandal when one of his three daughters is arrested as a suffragette: this simply will not do. Canny butler ‘William Crichton’ (Kenneth More) recommends a family trip to the South Seas until the social kerfuffle dies down. Shipwrecked during a storm, Crichton, the Earl, his daughters and two male friends make it to a deserted island. Also present is one of the family maids, ‘Eliza’ (Diane Cilento), who goes by ‘Tweeny’. It’s not long before class differences are reworked: Crichton possesses the common sense skills the pampered aristocrats sorely lack. As their stay lengthens, roles reverse.

A real pip, with winning performances and many clever touches (the set design, costumes) and location shooting in Bermuda framing the light adventure lark in gleaming Technicolor. The ever-steady and affable More deftly puts across the calm practicality of the servant-savior, with just the right blend of command, deference, good humor and fairness. Parker is a hoot as the flummoxed, eventually endearing Earl. The snippy daughters are ‘Lady Mary’ (Sally Ann Howes, striking), ‘Catherine’ (Mercy Haystead) and ‘Agatha’ (Miranda Connell): Mary goes from snooty and spoiled to running free as a veritable Nature-girl. The clumsy chaps are fellow aristocrat ‘The Honorable Ernest Wooley’ (Gerald Harper) and ‘John Treherne’ (Jack Watling), a clergyman. Deprivation and dependence wises everyone up. Diane Cilento sparkles as the disarming Tweeny, simply fetching. Back in England, the manner of the manor is held firm by the imperious ‘Countess of Brocklehurst’, done to a how-dare-you? tee by Martita Hunt. 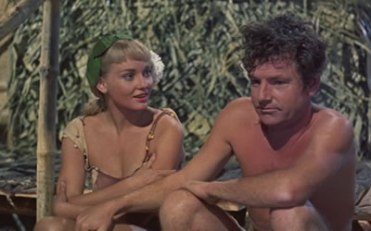 The work had previously been filmed for the silents in 1918 and again in 1919 (Male And Female, with Gloria Swanson, directed by Cecil B. DeMille). In 1964 More replayed the hero in the play adapted as a musical, then there was a 1968 TV version with Bill Travers, Virginia McKenna and Janet Munro. Photographed by Wilkie Cooper (Jason And The Argonauts), the 1957 version runs 94 minutes and also features Peter Graves (not the American actor), Miles Malleson, Eddie Byrne and John LeMesurier.