THE CARDINAL, one of 1963’s big, long, “prestige” pictures—and easily the talkiest—let director/producer Otto Preminger indulge his penchant for tackling subjects with a controversy quotient. This time organized religion, specifically the Catholic Church slice of the salvation pie, came under his frank, non-judgemental gaze, detailing the story of a priest, struggling over the years with his role in life, and in the lives of others. Robert Dozier wrote the script (then Gore Vidal and Ring Lardner, Jr. rewrote it, sans credit) off Henry Morton Robinson’s novel, a 1950 best-seller in 1950 that had racked over 25,000,000 copies. Robinson used 560 pages to tell his tale of Irish-American ‘Stephen Fermoyle’ from 1917 through 1939; Preminger took five minutes shy of three hours to put the episodic array of conversations, confrontations and crises on screen. Whatever the final judgement on the endeavor, his skill at martialing resources did achieve a lay miracle of sorts; the big-scale production, shooting in three countries, was accomplished in less than two months. *

As Stephen Fermoyle is about to assume the role of cardinal, flashbacks reflect on his journey to the honor. The plotline takes in his experiences in the States and Europe, highlighting his relations with family, supporters and adversaries, and the costs of loss and success. Handsomely lensed (Leon Shamroy, cinematographer) on locations in Massachusetts, Vienna and Rome, the movie doesn’t lack for period detail, and Jerome Moross gives it a properly serious music score. The trouble is, it’s a whole lot of talk to sit still for over 175 minutes, with a goodly amount of padding: what’s with including a music hall number with Robert Morse?  The “this will be thoughtful” tone is established from the credits sequence, composed of a long battery of shots that show the protagonist walking, mostly up endless church steps—the movie has more scenes of walking than a documentary on stairs. Most of the “big” moments are depressing—deaths of loved ones, a Nazi riot in Vienna, a Ku Klux Klan horsewhipping in Georgia—so fun lies elsewhere. In church? 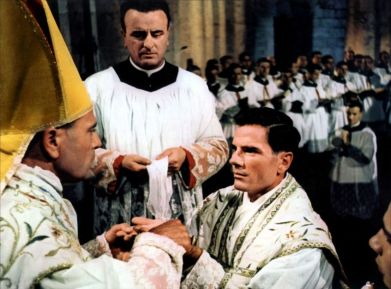 Tom Tryon, 26, mostly familiar from 17 episodes (1958-61) as frontier lawman Texas John Slaughter on Walt Disney’s The Wonderful World of Color, was given the crucial lead role, and while he’s fine, the script mostly uses him as a sounding board for more colorful characters. It proved to be a miserable experience for the sensitive actor, since Preminger, noted for on-set tyranny, went out of his way to humiliate his leading man: it’s one of the classic industry stories of abuse from above.

There is good work from Romy Schneider as a lively Austrian student who tempts Fermoyle from his vows, and Carol Lynley as his tormented sister—her career best role; Shamroy gives her luminous closeups. Taking top honors is John Huston, making his official acting debut at 56, as cagey ‘Cardinal Glennon’. Huston’s relaxed aura of power, humor and intelligence was perfectly suited to the part, which drew him a welcome Oscar nomination as Best Supporting Actor (gifted out to fellow old pro Melvyn Douglas for Hud).

Beyond universal praise for Huston, critics were not kind, but industry peers at the Academy Awards had Preminger nominated as Director and besides saluting Huston, further nominations accrued for Cinematography, Art Direction, Film Editing and Costume Design. The gross of $15,100,100 put it in 15th place for the year.

*  “Otto the Terrible” was aided from on-high (financially if not ethically) by the The Vatican helping to bankroll the cost; their liaison was 35-year-old Joseph Ratzinger, who 43 years later became Benedict XVI, the 265th Catholic Pope. Much of the attending controversy over the project came from Cardinal Francis Spellman, at the time the Archbishop of New York and a major force in the USA’s clergy-world: since the book had been partially inspired (if that’s the word) by events in his early life, he took holy umbrage. In today’s less-prejudiced times (or rather, bigotry has shifted focus where it can do more damage) it should be recalled that in the early 60’s there was still a good deal of anti-Catholic animus that rose to challenge John F. Kennedy’s run for President. The inane fear was JFK would “serve Rome”. Right, maybe after Marilyn Monroe and Angie Dickinson…