THE BATTLE OF THE RIVER PLATE fits the bill as a nautical war story; a class act, Old School, ‘stiff upper lip’ saga from England in 1956, written, produced & directed by the esteemed duo Michael Powell & Emeric Pressburger. The true tale of a famous sea chase and duel between a trio of British cruisers and a German “pocket battleship”, it warrants a salute for its overall fitness and factual fidelity. It’s unusual in that most British war pictures were done in black & white; this got the full treatment of Technicolor and VistaVision, with a slew of real vessels employed and striking location work done in Malta and Uruguay. *

“Well, Bobby, there’s only one thing left. If she gives us half a chance, I shall try and ram the beggar.” 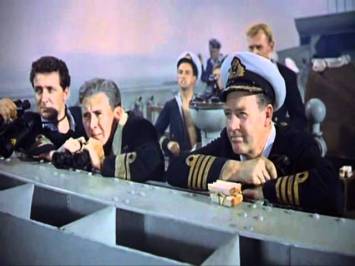 Late in 1939, WW2 in its 4th month. After sinking nine vessels in the South Atlantic, the heavily-armed German raider Admiral Graf Spee fights three game if overmatched British cruisers, HMS Ajax, Exeter and Achilles. Damage from the engagement (the war’s first naval battle) sees the Graf Spee put into neutral Uruguay’s port city Montevideo for repairs. The British close in for the kill. 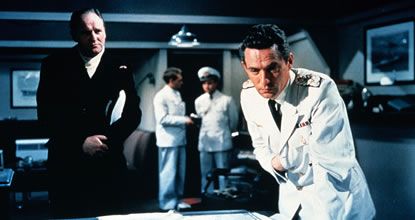 Produced for £274,071 (£7,992,285 in 2022), apart from a 23-foot model of the Graf Spee, the movie had the German ship doubled by the American heavy cruiser USS Salem. The Ajax and Exeter were “played” by HMS Sheffield and Jamaica, the Achilles by herself; five more ships served to represent others that were involved. Many hundreds of Montevideo’s citizens did duty as extras in the final dramatic scenes, reenacting a historical spectacle many of them had witnessed. Though it was the 4th most popular picture in England in 1956, when shown in the States, retitled Pursuit Of The Graf Spee the result was a demure 178th, taking in $1,000,000.

“Every commander is alone, Captain.”

Modern audiences spoiled by the marvels of CGI may not be overly impressed by the model work (done considerably better a few years later on Sink The Bismarck!) but those interested in seeing real warships maneuver and deliver thunderous broadsides will applaud: the recommended way of watching a naval battle is when you yourself don’t risk getting blown to pieces, incinerated or drowned.

* Prior to David Lean’s epic The Bridge On The River Kwai (backed by US bucks and an American leading man) few British war stories of the period were afforded the luxury of color film and going abroad to make use of it. Other than the 1939 classic The Four Feathers (Sudan), rare exceptions include The Purple Plain (Ceylon) and The Wind Cannot Read (India).