THE DOGS OF WAR in this intelligent 1980 thriller are a group of mercenaries, addicted to the rush of combat, and the arms vultures hooked on the profits harvested from providing the war dogs with their tools of trade. Frederick Forsyth’s well-researched 484-page novel provided the basis for the pared-down screenplay written by Gary DeVore and George Malko. John Irvin directed (feature debut), with Jack Cardiff as cinematographer. Twelve years earlier, ace cameraman Cardiff had directed the other top-rate, adult-minded adventure about “soldiers of fortune”, Dark Of The Sun. For this project, locations in Belize sufficed for ‘Zangaro’ (modeled after several West African countries with similar problems), with other filming accomplished in Miami, London and New York City. The production came in only slightly over the $8,000,000 budget.

After surviving an escapade in Central America, fighter-for-hire ‘Jamie Shannon’ (Christopher Walken) takes a recon job (for private business “interests”) in a dodgy, mineral-rich African country, ruled by a vicious dictator. Captured and interrogated (not gently), eventually deported, he returns with a select team (American, British, French, ‘Zangaran’) to depose the strongman.

In his first leading role (after copping a supporting Oscar for The Deer Hunter), Walken excels as the ice-cool mission leader and the supporting characters are all believably etched: the take is harsh and unsentimental, the violence strong but not cheaply sensationalized. The people in this convincing story play for keeps, the subject matter treated honestly, the audience with respect. 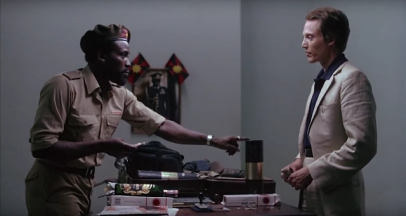 Geoffrey Burgon composed the spare and effective score. Added over the end credits is a haunting interpretation of A.E. Houseman’s 1917 poem “Epitaph on an Army of Mercenaries”, sung by Gillian McPherson.

Though well-reviewed, the (ever) topical, deadly serious film was not successful at the box office, audiences preferring movie mercenaries and their exploits to be more fanciful (the nice word for bullshit): it only made $5,484,000, 98th in ’80. 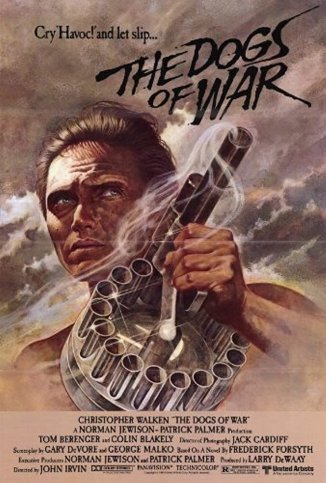