THE ROAD TO GLORY, from 1936, is a story of French soldiers trying to survive in the trenches of World War One. It doesn’t have the epic sweep of the earlier All Quiet On The Western Front or the knife-twist of the later Paths Of Glory, but with the naturalistic acting from Fredric March and Warner Baxter under the direction of Howard Hawks, it carries dramatic heft, and features a bombardment scene that pummels you through your sofa. Though it has some sentimental heroic flashes at the end, coming a few years before the world’s next, greatest, conflagration, this ode to waste doesn’t make war look like a whole lot of fun.

‘Lt. Michel Dunet’ (March) is new to the company led by ‘Captain Paul La Roche’ (Baxter), which has a tradition of valor going back to Bonaparte, but the strain of unending assaults and heavy losses is great. La Roche is a fine officer, but his nerves are further shaken when Dunet becomes enamored of a nurse La Roche loves and when his aged father shows up as a private, eager to serve his son in what the older man mistakenly thinks is war as it once was: glorious. 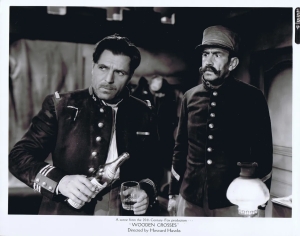 Impressed by the 1932 French film Les Croix de Bois (Wooden Crosses), Fox producer Darryl F. Zanuck bought the rights, and Hawks used some footage from the earlier film (the French answer to All Quiet On The Western Front) to augment his battle scenes filmed in California. Writing the script, William Faulkner and Joel Sayre (with input from Nunnally Johnson) also reworked elements from Hawks’ 1930 The Dawn Patrol and his 1933 Today We Live, so the material isn’t exactly fresh, but the actors are so good they provide cover for the familiarity. As the nurse who comes between March and Baxter, 19 year-old June Lang isn’t so much a “find”as just ‘found’: she’s not convincing. Neither is old pro Lionel Barrymore, in hamming mode as the glory-stuck papa of burned-out Baxter. Baxter and March, however, are excellent, and the teeth-jarring sound effects alone will have you rethink enlisting for someone else’s idea of freedom. 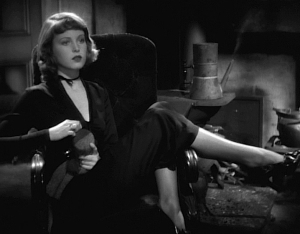 June Lang, the sort of WW1 front-line nurse you would expect

Hawks and March on the set