ATTACK, like the 1944 Battle of the Bulge it’s set in, jarred the war movie genre by punching a hole through the complacent lines of military films that soft-pedaled combat and/or glorified the institutions that dealt in lives as numbers. When the Pentagon saw the script they nixed any assistance, so director-producer Robert Aldrich did the best he could on a budget of $810,000. James Poe’s crackling screenplay from Norman Brook’s play “Fragile Fox” doesn’t condemn service itself—here it’s the U.S. Army—but the brass, ever-sensitive, couldn’t stomach the idea of  officers being portrayed badly, even worse here than in big guns From Here To Eternity and The Caine Mutiny. The tough-minded Aldrich took command of the situation and, with his fine cast, served up raw rations, tough to chew for audiences in Ike-complacent 1956. *

Late 1944. With the war in Europe nearing an end, conscientious ‘Lt. Joe Costa’ (Jack Palance) and his men are not just burned out by fighting; they’re disgusted to the danger point by the craven actions of their company commander ‘Captain Erskine Cooney’ (Eddie Albert), who’s clearly more interested in looking good to hometown pal ‘Lt.Colonel Clyde Bartlett’ (Lee Marvin) than in the welfare of the men. Pressed into another battle, enmity between Costa and Cooney crosses the line.

The action scenes are straightforward and pitiless, memorably grueling at a key point, but in the main it’s the intense interplay between the characters that grips you, vitally etched by actors clearly relishing the chance to let loose and walk right up to the fine line between cold reality and hot melodrama. Palance’s customary brio is taken down a notch to simmering sensitivity, his distinctive visage adding a haunting eloquence to Costa’s outrage. Rising light Marvin gets to go big and dangerous as the manipulative Colonel, a political opportunist who sees a gain in every loss. Palance’s squad is a choice team that includes Buddy Ebsen, Robert Strauss and Richard Jaeckel. Stage actor William Smithers does well in his feature debut. Best of all is Albert, tearing into the cowardly, eventually deliriously unhinged Cooney, a stunning change of pace from his general nice-guy persona (Aldrich would later give him two more capital-B bastard roles in The Longest Yard and Hustle); he’s terrific. Joseph Biroc’s camerawork is top notch. **

Cogerson places the US gross at $5,700,000, 49th in ’56. The grim outing did quite well in carnage-seasoned France and Italy. With John Sheppod, Peter van Eyck, Steven Geray, Strother Martin, Bing Russell. 107 minutes.

* Aldrich: “My main anti-war argument was not the usual ‘war is hell,’ but the terribly corrupting influence that war can have on the most normal, average human beings, and the terrible things it makes them capable of that they wouldn’t be capable of otherwise.” His wasn’t the only production that year featuring a wacked-out officer: character flaws figured in Between Heaven and Hell, Away All Boats, The Bold And The Brave, D-Day the Sixth of June and The Rack. However, Attack is the harshest. If you wanna quibble, one flaw of the Aldrich picture is the total absence of snow, a salient aspect of the Bulge: bite the budget.

** Minor note for the numbers crunchers and finger wavers in the outfit: like most war movies, this has actors too old for what their real-life counterparts would likely be. Albert was 49, Ebsen, 48, Strauss, 43, Palance 36, Marvin, 32. Ever-youthful Jaeckel, 29, was closest to the mark. BUT, hold your fire—lest we come off snarky, we note that except for Strauss, a decade earlier all those actors had served in WW2; Palance and Marvin wounded, Albert decorated for valor (in one of the Pacific’s nastiest battles, Tarawa). 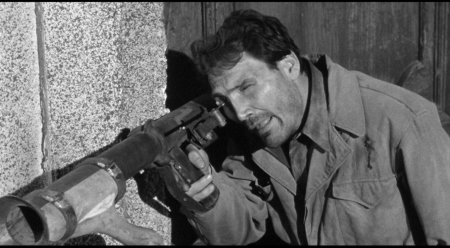