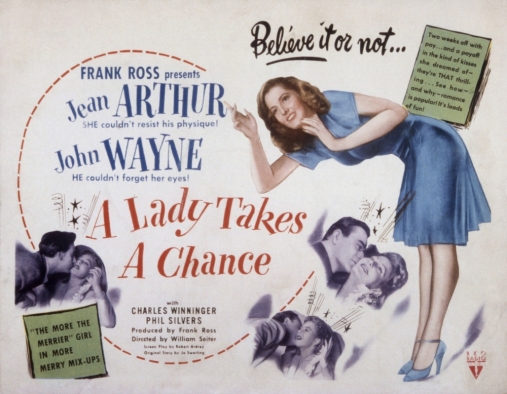 A LADY TAKES A CHANCE made for an enjoyable 86 minutes away from war news (and war movies) in 1943, teaming Jean Arthur with John Wayne in a pleasing, girl-meets-cowboy romantic comedy. The wistful stage is set by the prologue: “Once upon a time: It was so long ago that people drove sixty miles an hour, And skidded their tires, And drank three cups of coffee all at once, And ate big gobs of butter, And there were more fellows around then there were girls, and everybody was having a good time without knowing it. That’s when our story happened. Away back then…in 1938. And here’s hoping that ‘Once upon a time’ goes on again some quick tomorrow. Only better.” 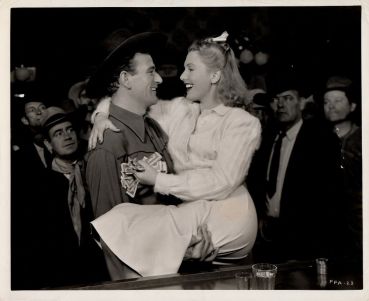 ‘Mollie J. Truesdale’ (have you ever met anyone with a name like that?), native New Yorker, escapes the city and some unsuitable suitors for a bus trip across the country, promising “fourteen breathless days of romance and adventure“. Both promises seem to literally fall from the sky when Mollie attends a rodeo and a bronco bucks cowboy ‘Duke Hudkins’ right into her lap. Meet-cute established, Robert Ardrey’s script, directed by William A. Seiter, then follows due course with the back & forth spark & spat expected from such sagas, and thanks to the two genial stars it works rather well. Well-vetted in the genre, Arthur glows and Wayne displays an easygoing manner with the light material. Naturally, since it’s set out West and Duke’s Duke is a cowboy, there has to be some dustup, and that comes in a funny sendup of a barroom brawl. Always a plus, Charles Winninger provides able backup as Wayne’s partner ‘Waco’. *

Though she earned an Oscar nomination that year (her only one, for The More the Merrier) at 43, Arthur’s box office status had slipped considerably, as had her interest in Hollywood in toto. With her husband Frank Ross as producer, RKO allotted $250,000 for the advertising budget, a whopping amount at the time, especially for a mid-range comedy. The hoopla, and the stars charm, turned the trick: the amusing vacation from a sea of seriousness came in 36th place, grossing $6,500,000. 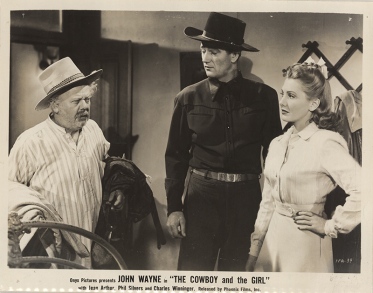 * Forever identified with westerns and action, Wayne’s few forays into comedy prove he could deliver smiles as well as haymakers. Obviously, there’s The Quiet Man, but this oldie with Arthur is overlooked as is Without Reservations (1946, with Claudette Colbert). 1953’s Trouble Along The Way is sappy, but the early 60’s saw him have ample fun, self-kidding in North To Alaska, Hatari!, McLintock! and Donovan’s Reef. He once told Doris Day he regretted not donning a tux and working with her in a lark.