BLITHE SPIRIT added its sophisticated mirth to the outstanding lineup of British films from 1945, the final year of the global conflict spurring a raft of classics from the war-battered ally. Written over six days while taking a break from the Blitz, Noel Coward’s hit play was adapted by David Lean, Ronald Neame and Anthony Havelock-Allan, with Lean directing a Coward creation for the 3rd time in a row. *

“As I’m pained to observe that seven years in the echoing vaults of eternity have in no way pared your native vulgarity.” 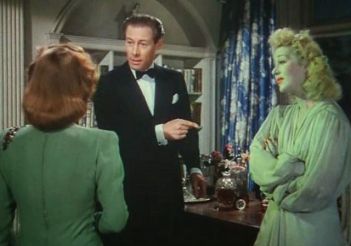 Acidic author ‘Charles Condomine’ (Rex Harrison), seeking research material for a book, invites, as much for self-amusement as information, local medium and eccentric character ‘Madame Arcati’ (Margaret Rutherford) to his country home for a séance. ‘Ruth’, Charles second wife (Constance Cummings), and other guests think the whole thing a farce, but Charles finds out otherwise; his deceased first wife ‘Elvira’ (Kay Hammond) is summoned and appears, in ghost-green hue, but only to him. With casually caustic Elvira keeping Charles busy sparring with an entity the jaded and jealous Ruth can’t see, his already shaky second marriage seems bound for the rocks. His withering putdowns aren’t helping. Madame Arcati to the rescue!

Veddy British and very funny put-on from Coward’s fertile imagination is lifted from being stage bound (a one-set affair) to the more visually oriented demands and delights of film. Sophisticated American actress Cummings (she moved to England in the mid-30s) is okay as flustered Ruth, but both she and her character are outshone—or outglowed—by Hammond’s droll naughtiness as Elvira, aided by spectral makeup and deft camera and effects trickery. She originated this role on the stage. Harrison, returning to the screen after serving in the R.A.F., bites into Coward’s dry ice dialogue with razor-sharp enunciation, but whether or not you like him in comedy (his mainstay) or not is a matter of opinion: for myself I’m impressed with his dramatic work (Anna and the King of Siam, Cleopatra, The Agony and the Ecstasy) but never find him warm enough to enjoy in light fare (knowing he was such a total rotter doesn’t help). Plus his character of Charles is a cad.

“You invite mockery, Charles. Something to do with your personality, I think—a certain seedy grandeur.”

To the rescue with flying color (starting with her mad dash introduction via bicycle) is the priceless Margaret Rutherford. Fifty-three at the time, she’d been in films for nine years and on stage for 21; like Hammond, she’d originated this role in the play. She owns the movie, every scene she’s in is a delight: things sag when she’s offscreen as not only is her acting the most arresting and inventive, but the madcap, sincere and exhilarating Madame Arcati  is easily the most likable character in the group.

Today it’s highly regarded, but at the time even with the play’s popularity this witty spell didn’t conjure movie audiences, either in Britain, or when it migrated to the U.S. where a pale $500,000 placed just 159th for the year. It did however, win an Oscar for ‘Special Visual Effects’.

“It’s discouraging to think how many people are shocked by honesty and how few by deceit.” 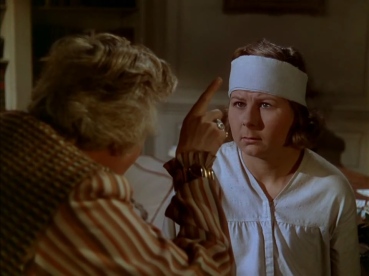 * Adamant about how his most-successful play (1,997 performances in England, another 667 on Broadway) would make the transition to film, Coward was teed off at Lean for making a few changes, letting him know ” “My dear, you’ve just fucked up the best thing I ever wrote.” Coward may have known how to write, but former editor Lean knew film and his choices made the play’s settings and characters more accessible (and palatable). Their working association, begun with In Which We Serve and This Happy Breed,  wrapped up with the poignant lost romance favorite Brief Encounter which followed into theaters shortly after this fantasy lark. 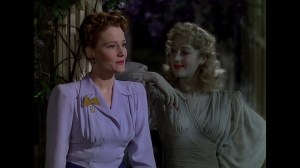