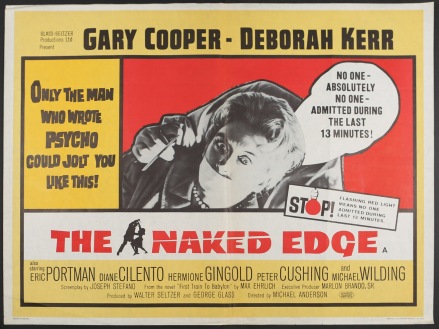 THE NAKED EDGE, a misbegotten mystery thriller from 1961, is chiefly remembered as Gary Cooper’s last time on screen: 60, he died of cancer a month before it came out. A regrettably weak finish to a 36-year career and 84 feature films, with a stilted performance from Coop. Greater blame for lame belongs to a poor script from Joseph Stefano, indecisive direction by Michael Anderson and a simply terrible music score, its blaring cues so insistent they’re comic, the worst work in composer William Alwyn’s extensive and otherwise distinguished résumé. 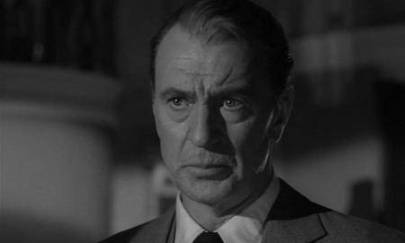 London-based American businessman ‘George Ratcliffe’ (Cooper) testifies against a fellow employee in a murder trial, which also involves a large amount of unrecovered cash. Protesting his innocence, the man is convicted, and not long after George comes into an out-of-the-blue financial windfall. Years later, George’s wife ‘Martha’ (Deborah Kerr) begins to have serious doubts about the case, the money and George. His cagey reactions and inconsistent behavior don’t put her at ease. 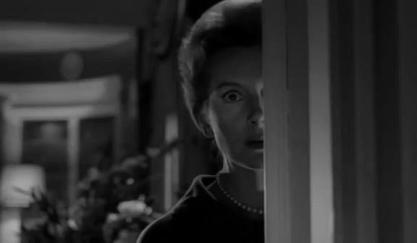 Cooper’s half-hearted (being quite ill didn’t help), the script (Stefano had just struck gold with Psycho) has several needless and unresolved subplots and if director Anderson approved of Alwyn’s score he shares responsibility for its wrecking every scene it can ram dissonant notes into.

Other elements work. Kerr’s always fine, and there’s a strong supporting cast, even if a few of the players (Hermione Gingold and Michael Wilding) are stuck in the padded subplots. Eric Portman and Peter Cushing add flair, but the acting honors go to Diane Cilento, passionate and explosive in her brief role as the imprisoned man’s distraught wife. Erwin Hillier’s moody black & white cinematography is another plus. 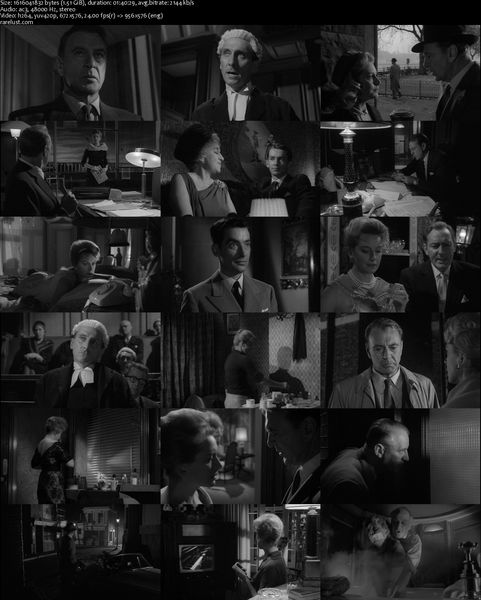