ROAD TO RIO, the 5th ‘Road’ picture with Bob Hope, Bing Crosby and Dorothy Lamour, was a major audience grabber from 1947; often called one of the best of the seven in the series. The title tells you where they’re headed, although the cast and crew never got closer to Brazil than the back lot at Paramount. Gags (topical, self-kidding and slapstick), songs (unmemorable), footwork (amusing), guest acts, and hypnosis for a plot gimmick.

Song & dance partners ‘Scat Sweeney’ (Crosby) and ‘Hot Lips Barton’ (Hope) scoot from state to state to do their routines, duck creditors and avoid being girl-trapped. After accidentally burning down a circus in Louisiana, they stowaway on a boat bound for Brazil. On board they meet ‘Lucia Maria de Andrade’ (Lamour) who suddenly switches from sweet to sour and back: this is because her larceny-minded guardian uses hypnosis on her, plotting a scam to finalize in Rio de Janiero.

* For figures fanciers, this is yet another case where the box office take is flummoxing to pin down: as we blissfully skip into collective planetcide these things are really vital. Released at Christmas in 1947, it scooped most of its moola in 1948. Cogerson lists it 7th for ’47, grossing $12,200,000. Variety had it as #1, as do a few other sources, including Richard Zoglig, the best biographer of Hope. One thing is for sure: Bob & Bing’s production companies each had a 1/3 stake, so their march toward becoming two of the richest men in the country got another golden goosing. Hope: “Bing and I hardly left the set, except to go to the men’s room. At precisely sixty minutes after lunch was called, Bing would say ‘All right, let’s get moving. What are we waiting for?'”  One person less than happy was Lamour, insulted when the production deal left her out, reflecting “They could have considered a four-way split, but no one ever asked me. My feelings were hurt.” 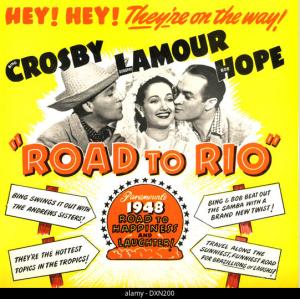