MONSIEUR BEAUCAIRE, a consistently amusing costume farce from 1946, gives Bob Hope one of his best roles, playing to his well-honed strengths as randy but amiable wiseguy and  cowardly clod. This critical and audience success, along with a big hit the same year in Road To Utopia (the top grosser of the Bob & Bing “Road” flix) brought Hope back home from his intensive morale-raising tours of WW2, and launched a new string of crowd-pleasers that saw few misses until laziness set in by the early 60’s. In this one, Bob’s at the top of his game. *

“Are all your young noblemen so…so…peculiar?”

France and Spain, the 1700’s. After displeasing King Louis XV of France, royal barber ‘Beaucaire’ (Bob) escapes with a Duke (eternal second-stringer Patric Knowles) to Spain where, after trading identities, they run afoul of a plot by schemer ‘Don Francisco’ (Joseph Schildkraut in keen swine mode) to start a war between the two kingdoms (not hard to do in the 1700s). Naturally the clumsy barber and the gallant duke are each smitten by aristocratic ladies (Joan Caulfield and Marjorie Reynolds). 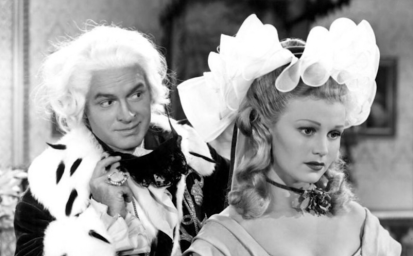 Smoothly paced by veteran director George Marshall, it’s a good-looking production, with plush costumes (a pity it wasn’t done in color) and well-appointed sets, the gag action goosed along by a flavorful score from Robert Emmett Dolan. Hope’s razor-sharp timing and voice control with quips and his fluid gift for physical schtick are precision matched with instinct. The cleverness collected $8,000,000 from war-freed audiences, who secured it as #22 in ’46.

* The script, shared by Melvin Frank, Norman Panama and Frank Tashlin, was spun off the novel written in 1900 by Booth Tarkington, which had already spawned a play, an operetta and a 1924 silent version with Rudolph Valentino.

Watching Hope’s skill in this farce brings to mind Woody Allen’s Love and Death. Allen: “He was a wonderful comic actor. He’s totally committed to his character: he’s scared when he’s supposed to be scared, leching when he’s supposed to be leching, playing someone more grand than he is. He was not a sufferer, like Chaplin, or even as dimensional like Groucho Marx, who suggested a kind of intellect. Hope was just a superficial, smiling guy tossing off one-liners. But he was amazingly good at it.”