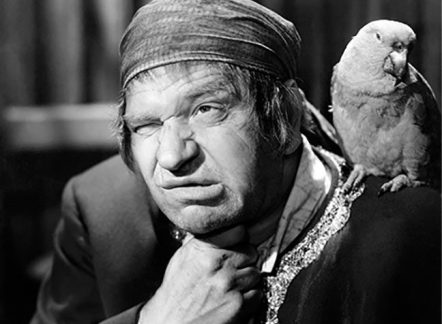 TREASURE ISLAND was rediscovered for its first sound version in 1934, after four previous silent adaptations. MGM doled out $825,000 and put Victor Fleming to man the wheel as director for a salty imagining of Robert Louis Stevenson’s 1883 adventure novel.

“Silver’s the name, Long John Silver they calls me. At your service, sir.”

After rude rogue ‘Billy Bones’ (Lionel Barrymore) barges into his mother’s tavern and blabs about treasure, young ‘Jim Hawkins’ (Jackie Cooper, 11) becomes part of a voyage to seek it out. The garrulous peg-legged cook ‘Long John Silver’ (Wallace Beery) has his own ideas of who should dig up and keep the loot, and he brings a scurvy lot aboard to help him. Jim thinks Silver is swell, until… 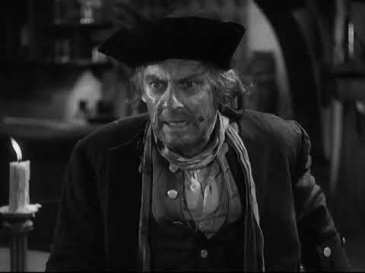 No doubt this vintage chestnut of boyish innocence and loyalty tested by the dirty deeds of rascals won over many a would-be-adventurer back in the ’30s, and a new batch when it came to TV in the late 50’s: your humble cabin boy has a dim memory of seeing it, probably around the time Ike traded places for JFK. Kids fell for the Beery-Cooper team-up (their third of four), the creepy pirates and action (the considerable violence is pretty gnarly for the day). * 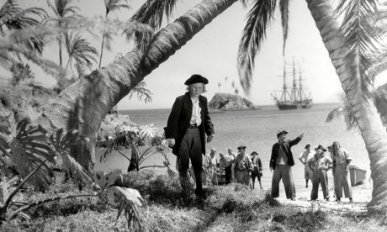 Too bad the rest doesn’t date well. Though it’s a handsome production, visually impressive (a full-scale ship, location shooting on Catalina Island), much of the acting can make you seasick. Barrymore kicks it off with the worst overplaying of his career (no mean feat), so gusty you’re grateful when Billy Bones stops being ‘colorful’ and just croaks. Beery’s mugging hasn’t aged well in general. Worst, Cooper is annoying all the way through. As in his other movies he did with Beery—The Champ, The Bowery, O’Shaughnessy’s Boy—Jackie (about as English as a coconut) has to turn on the tear ducts. Often. When he exclaims “Upon my word!” for the tenth or eleventh time you’ll wish you had a harpoon handy. Some memories are best left sleeping. 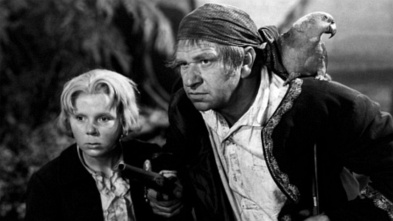 “Yo-ho-ho, and a bottle of rum. Fifteen men on a dead man’s chest.”

* Beery’s long run of popularity would drop off soon after, but he had two more successes in ’34, swaggering as larger-than-life historical figures in Viva Villa! and The Great Barnum. His broad portrayal of Long John Silver would be challenged 16 years later by Robert Newton in Disney’s well-regarded Technicolor version.