THE LADYKILLERS seduced critics and audiences in 1955 with a blend of black comedy and crime delivered with British civility. Though adamantly English, it was written by an American, William Rose, who said he literally dreamt up the script. His nocturnal muse earned him an Oscar nomination. One of the more popular and most fondly remembered of a series of highly-praised comedies Alec Guinness made during the era, it also gave a breakout role to Peter Sellers. Guinness, Sellers, Cecil Parker, Herbert Lom and Danny Green are all billed above but play second fiddle to 76-year-old Katie Johnson, who ever-so-gently steals the movie out from under them. *

When elderly, genteel, slightly eccentric ‘Mrs. Wilberforce’ (Johnson) leases a room to ‘Professor Marcus’ (Guinness), music teacher and effusive flatterer, she’s happy to have company besides her pet parrots. She’s even more tickled when his four friends show up to practice their string quintet. ‘The Major’ (Parker) is a fastidious, fawning ex-officer; ‘Louis’ (Lom) is a dapper and dour; ‘Harry’ (Sellers) a blithely clumsy cockney; ‘One Round’ (Green) is a childlike hulk. When she discovers they’re not who they ‘play’ they are, not musicians but thieves, she’s offended. Found out, what will they do about her?

Deftly directed by Alexander Mackendrick, the macabre element is played just right, though a few slapstick bits—the scene with the horse and fruit cart, and the telephone booth bit—are on the broad side. Guinness sports outlandish makeup to disappear into “likely madman” territory, looking like a cross between Alastair Sim and Lon Chaney. Lom stays intense and sinister, Parker dials up a fuddy duddy popinjay, heavyset Green a British version of Mike Mazurki out of Damon Runyon. Sellers, still on the chubby side, is all right, not yet ready to go full throttle (some of his part stayed in the editing room). But 77-year-old Katie Johnson puts them all in the shade.  On the stage in 1894 at the age of 16, she entered films in 1932. This was her next-to-last role: she passed away in 1957 after doing How To Murder A Rich Uncle, another dark farce. Her kind-eyed, soft-spoken decency is the perfect counterpoint and foil to the overconfident crew of goons who think they can manage her.

“Simply try for one hour to behave like gentlemen.”

A smash in England, it made $2,200,000 in the States, placing 129th. Revived often on the stage, and very badly remade in 2004 by The Coen Brothers: their worst film, replacing wit and charm with profanity, even defeating Tom Hanks valiant try in the lead. With Frankie Howard, Jack Warner, Philip Stainton, Kenneth Connor. 97 minutes.

* Though he’d done little parts in a few films, this was the first sizable role for Sellers, 29, then known for radio comedy, as part of The Goon Show.

While 1955 saw a flood of Americana-themed pictures, the Mother Country staged a stealth mini-invasion of her upstart colony: Summertime, Richard III, The Deep Blue Sea, Moonfleet, The Quatermass Xperiment, The Warriors, The King’s Thief, Doctor At Sea, The Cockleshell Heroes, The Dam Busters, The Prisoner (Guinness), To Paris With Love (Guinness) and A Kid For Two Farthings. 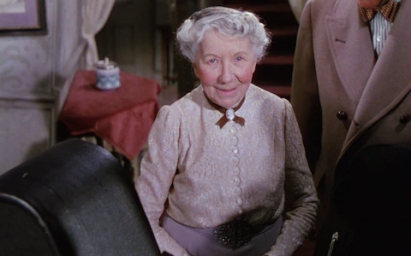