I’LL SLEEP WHEN I’M DEAD—no, don’t wait that long: just sit down to this 2003 turkey and  fight to stay awake while 102 minutes of pointless ugliness, pregnant pauses and guffaw-inciting pretense crawl by. Director Mike Hodges final (worst?) film is a misbegotten retool of his first and best, Get Carter. Barely released after some festival entries, it slept at the box office: the worldwide gross gone dead at $490,964.

Retired gangster ‘Will Graham’ (Clive Owen) comes back to London to find that his younger brother ‘Davey’ (Jonathan Rhys-Meyers), has committed suicide. That came as a result of being buggered by ‘Boad’ (Malcolm McDowell). We know this early on, thanks to a vile rape scene: one-note “hero” Will/Owen takes his time finding out and then goes on the payback trail. On the way to what We Know Will Follow, he encounters old flame ‘Helen’ (Charlotte Rampling) and assorted underworld scuzzbags. When they’re not spitting swear words, they’re hamming on wry with sudden flights of insight. Who knew street meatheads were hidden poets? We know the good guy gets dead serious when he gives his Jaguar a bath and submits to a shave. 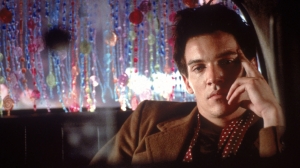 That look sums up the whole experience

Off-putting brutality, lazy motivation, faux meaningful exchanges of lame dialogue, a “huh”? finale that leaves open ends dangling. Pretentious twaddle wastes Owen, stuck posing glumly. McDowell, looking like a specimen of alien life, goes pop-eyed down the depraved road one too many times. Rampling plays with one expression throughout, absent a pulse or spark of interest. One partially redeeming attribute is a pensive score from Simon Fisher-Turner. Otherwise–boring, obvious and decidedly unpleasant. Movies this dispiriting make you think World War 3 might not be such a bad idea after all.

Staggering into 217th place in ’03, with—let’s give them credit since they didn’t write or direct it—able supporting performances from Jamie Forman, Ken Stott, Sylvia Sims, Amber Batty and Daisy Beaumont.