ENDLESS NIGHT wasn’t successful upon its release in Britain in 1972, then United Artists decided to cut losses and not distribute it in the States. Directed & scripted by Sidney Gilliat, it’s an adaptation of one of Agatha Christie’s best-reviewed books, and put Hayley Mills into her third teaming with Hywel Bennett, after The Family Way and Twisted Nerve. An interesting supporting cast back them, with the slow-burn mystery pensively undercoated by a score from Bernard Herrmann.

On a job as a chauffeur, ‘Michael Rogers’ (Bennett) spies ‘Gypsy’s Acre’, an idyllic spot on the coast of Devon and dreams to one day have a house designed there. That becomes possible when he chance meets ‘Ellie Thompson’ (Mills), good-natured, down-to-earth and as fate would have it, a fabulously wealthy heiress. Love blooms, marriage results, but what’s the score with ‘Greta’ (Britt Ekland), Ellie’s assistant and friend? Why is Ellie’s uncle (George Sanders) suspicious? How come her stepmother (Lois Maxwell, on loan from 007) is such a bitch? And who/what is that creepy old dame (Patience Collier) who shows up at odd moments? Does ailing architect ‘Santonix’ (Per Oscarsson) know more, or is he just saddled with a suspicious name?

Though Mills has top billing, the larger role and focus of the plot goes to Bennett. They’re both quite good, flanked by the offbeat contributions from the others. As ever, Hayley displays an instinctive gift for conveying the natural and most effective gesture, tone and expression. Herrmann’s score is subtle, with just a reminder of his earlier work on Marnie. The attractive locations and sets are an added plus.

“Reuben has never been known to get anything right… horses, women or facts. His incompetence borders on the supernatural.”

The film’s lack of success made for a hushed finish to director-scenarist Gilliat’s lauded career, and was also the next-to-last appearance of Sanders, 65, who bid life adieu several months before it premiered. It’s since developed a following, and despite a few bumpy spots is well worth chasing down. Christie fans will approve, and Hayley, aglow at 25, could not be any prettier. It’s fun to see Lois Maxell outside of her ‘Miss Moneypenny’ Bond persona, and there is a cameo from old pro Leo Genn. 99 minutes. 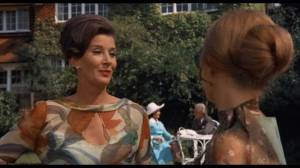 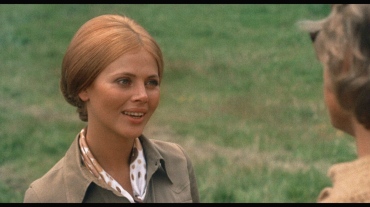