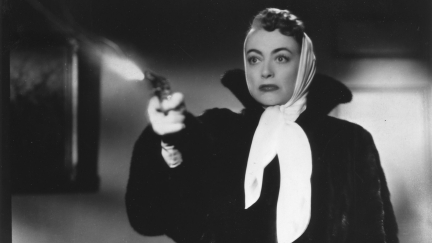 SUDDEN FEAR was part of a quartet of 1952 items that revolved around people in show business. The Bad And The Beautiful, the biggest hit of the four, covered various Hollywood types (producer, writer, actors, studio head); The Star concerned a fading movie actress trying to stay relevant; Actors and Sin spoofed both Hollywood and Broadway. Sudden Fear takes the thriller route to great effect, giving Joan Crawford, 46, one of her best mid-career showcases, and gave a big break to 33-year-old newcomer Jack Palance. Several Academy Award nominations resulted, and the $720,000 production earned $4,600,000 (’52’s #67). For Crawford that was extra icing on a well-baked cake, since her deal as executive producer gave her 40% of the profits, a deal that would have given her old boss Jack Warner a sudden coronary. 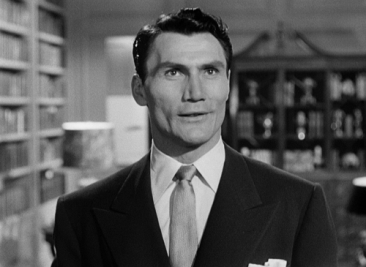 “I was just wondering what I’d done to deserve you.”

Highly regarded playwright ‘Myra Hudson’ (Crawford) rejects struggling actor ‘Lester Blaine’ (Palance) for a part in one of her Broadway-bound projects,  but later falls for him when they share a cross country train trip to San Francisco. They marry, and all seems swell, but Lester is a more persuasive actor than Myra figured: he has a girl on the side, ‘Irene Neves’ (Gloria Grahame), and they plot to assume control of Myra’s estate. But Myra’s in the way. What to do? Discovering what they’re up to, unable to prove it, terrified, it appears she’s trapped. 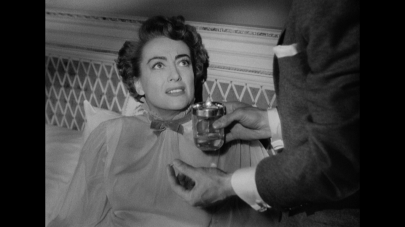 Written by Lenore J. Coffee (Old Acquaintance) and Robert Smith, directed by David Miller (Lonely Are The Brave), this overheated but exciting melodrama hits the bricks running thanks to newly arrived composer Elmer Bernstein’s smashing score. Abetted by excellent chiaroscuro cinematography from Charles Lang, the cat & mouse games give Crawford an emotional field day, which she plays to the limit (and just enough within it to not edge into camp), and allows fresh talent Palance a similarly strong showcase. Grahame’s bad girl is disguised-tramp sexy.

The supporting cast features Bruce Bennett, Virginia Huston and Mike Connors, 26 in his debut, as ‘Touch’ Connors. Crawford drew her third and final Oscar nomination, batting against rival Bette Davis’ The Star, ceding victory to 52-year-old plain Jane (and plain wonderful) Shirley Booth in her left-field feature debut with Come Back, Little Sheba. In just his third part following strong work in Panic In The Streets and Halls Of Montezuma, Palance went up as Supporting Actor, and both Lang’s lensing and Sheila O’Brien’s costume design were also nominated. Sudden Fear delivers, as star vehicle and suspense entertainment. 110 minutes. *

* Connors: ” There were days Joan looked so angry that I was afraid she was going to chuck something at Jack. She put all this intensity into her performance instead, thank goodness. She pretended Gloria didn’t exist, and I just tried to stay out of her way. I think David Miller found it all a trial, but he stayed on keel in spite of it. Not the easiest way to make movies, but exhilarating, I guess.” 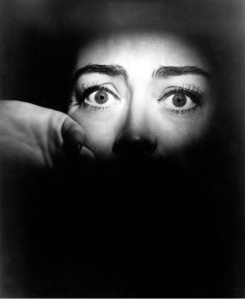 Grahame, 28, consoled herself by nabbing an Oscar as Supporting Actress for The Bad And The Beautiful, as well as decorating Robert Mitchum’s Macao and the year’s biggest hit, The Greatest Show On Earth.

Joan did find an ally in ace cameraman Charles Lang, who’d go on work with her (and to her specifications) in Female On The Beach, Queen Bee and Autumn Leaves. Lang’s 151 credits include Gunfight At The O.K. Corral, The Magnificent Seven, One-Eyed Jacks and How The West Was Won, though whether covering epic gun battles was easier than acceding to a diva’s demands is a good question. Sudden Fear’s superb shadow play was one of his 18 Oscar nominations (he won four).

For the intense and offbeat Palance, a few more supporting roles (including his most famous in Shane, another nomination) and he began to get star parts, like his contemporary Ernest Borgnine, another similarly unlikely leading man. 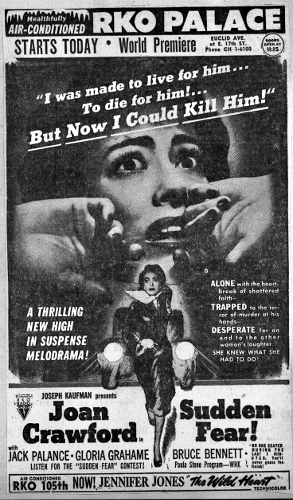