SATURDAY NIGHT AND SUNDAY MORNING followed the clarion cry of Britain’s “angry young men” and surged this uncompromising 1960 working class rant into the breach blasted opened by Look By In Anger and Room At The Top. Twenty-three year old Albert Finney, a rising stage actor with only one film credit (a few lines in The Entertainer) arrived in gale force with his fearless performance of the lead role.  “I believe you, thousands wouldn’t.” 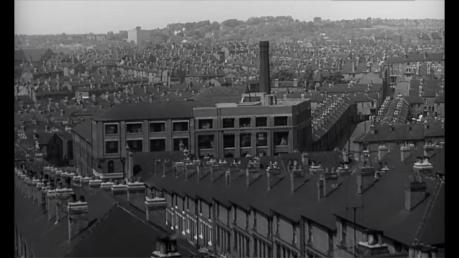 For pay ‘Arthur Seaton’ (Finney) works a lathe at a bicycle factory in Nottingham. For play, it’s a ceaseless round of carousing in pubs, and snaring “birds”. He’s let himself in for trouble by messing around with ‘Brenda’ (Rachel Roberts), married to a decent but dull co-worker. Despite the inconvenience of getting Brenda pregnant, Arthur pursues single and serious ‘Doreen’ (Shirley Anne Field). Brash and brusque, Arthur sums up his philosophy with “Don’t let the bastards grind you down. What I want is a good time. All the rest is propaganda.” * 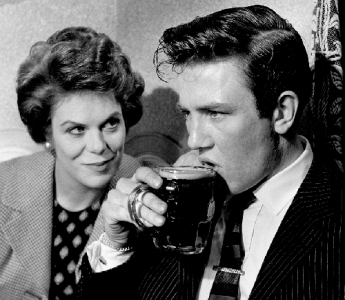 Alan Sillitoe adapted the adult, pointedly frank screenplay from his debut novel, 214 pages taken largely from his own harsh life experience. Karel Reisz directed, doing a superb job in his first time helming a feature, adding to the bleakly realistic tenor by location shooting in Nottingham. Everything feels so real you’ll want to move to France. **

Finney’s barely contained fury has enough raw intelligence behind it that he keeps you interested in Arthur even though he’s arrogant and callous. Roberts excels as the engaged but entrapped Brenda: was this the first—or at least the most frank—presentation of the subject of abortion in a major film? Field’s sharp-featured radiance is tempered by independent-minded Doreen’s honesty and decency. Bitter tea, like others of its social realism ilk, the “kitchen sink” lot that dabbled in Britain’s workaday despair from 1959’s Look Back In Anger before sputtering out of outrage in the late 60s, superseded by the Empire-redeeming 007 and skinny blokes with electric guitars. Birds flocked en masse.

“What do you think having a kid means? You’re doped and sick for 9 months, your clothes don’t fit, nobody will look at you. One day you’re yelling out and you’ve got a kid. That’s not so bad but you’ve got to look after it for the rest of its life. You want to try it sometime.”

Producers Tony Richardson and Harry Saltzman made this on the skint for £116,848 (£2,380,760 in 2022), it rocked the homeland, earning quadruple its cost, becoming the #3 hit in Britain; diminished exposure and a big no-no from the Catholic Legion of Decency (“Pardon me while I fall down laughing”) in the States only pulled $900,000, 129th for the year.

“They have a television set and a packet of fags, but they’re both dead from the neck up.”

Apart from the relentlessly downbeat nature of the setting and story and Arthur’s consistently off-putting demeanor and irresponsible actions (someone needs to kick his ass: someone does), one caveat in watching is to hope for subtitles: the Midlands argot, slang slung with speed by the at-home cast, is on occasion just sodding bloody hard to decipher (as if Arthur would give a monkey’s damn). 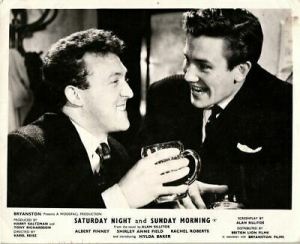 Observing the success of this picture, Ian Fleming was impressed enough by producer Harry Saltzman that he sold him the rights to his increasingly popular series of novels featuring an Englishman more refined than Arthur Seaton, a chap named Bond. 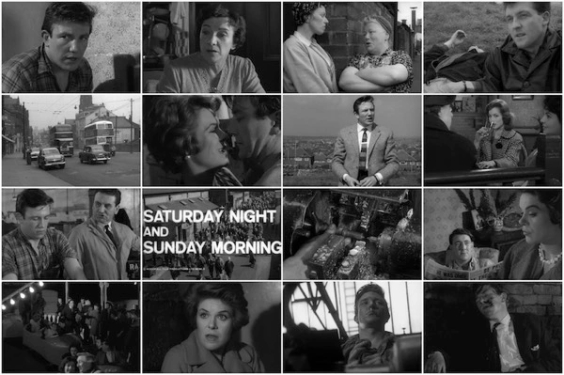