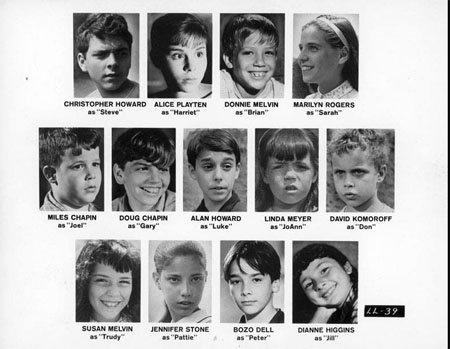 LADYBUG LADYBUG —-while the cute little insects are accepted as adorable, we forget they do have a bite, though usually more surprising than irritating or worrisome. This pint-sized item from 1963 nips beyond its weight class, and can come as a real surprise to movie buffs who, if they don’t think they’ve “seen ’em all” (try counting ants), think they’ve at least “heard of” whatever has merited mention. Thanks to a review from the “seen most of ’em” Glenn Erickson of CineSavant (“Plug! Plug!”) yours truly was wised up to this imperfect but arresting gem, and am de facto abashed that somehow over the span of six decades of logging everything from Becket to The Bowery Boys never heard so much as a peep on it. If you’re wrinkled enough to recall the era of bomb shelters and the countdown days of the Cuban Missile Crisis, catching this ‘bug’ will give you a memory shiver. *

At a rural grade school, the civil defense signal begins to whine, indicating a nuclear attack is imminent. Not knowing at first whether it’s a test or malfunction, the principal (William Daniels, debut) has the teachers lead students to their homes, some in buses, others walking. Playing out over 82 unsensational but unnerving minutes, the societal-crisis-in-miniature shows the different reactions of the staff, the kids and a few of the parents who are reached earliest. Excitement and irritation turn to worry and panic, stirred with pragmatism and arguments,  disbelief and despair.

A handful of stage actors, some later noted for film work, are blended with amateurs (the kids) and it works to excellent effect, accompanied by a gentle score from Robert Cobert. Directed by Frank Perry, the trim but telling script written by his wife Eleanor, following their indie hit from the previous year, David and Lisa. They shot in the countryside around Gradyville, Pennsylvania, the bucolic, peaceful settings and sunny broad daylight serving poignant counterweight to the specter of doom approaching from the sky, unseen and unstoppable.

Along with Daniels, the adults include Nancy Marchand, Kathryn Hays and Estelle Parsons (debut). Among the youngsters, particularly good are Christopher Howard and Marilyn Rogers (touching as ‘Steve’ and ‘Sarah’, reaching shyly for connection), Alice Playten (the domineering ‘Harriet’, who takes dictatorial charge of her family’s fallout shelter) and Miles Chapin (‘Joel’, with a shy crush on his teacher). 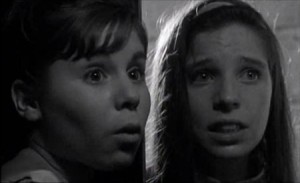 Released one month after JFKs assassination, it drew some positive reviews but attendance barely rippled, taking in a minuscule $600,000. 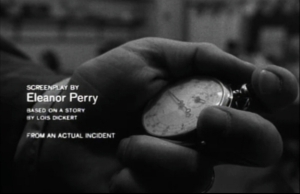 * It adds to the plaintive yet powerful payload that thanks to the ever-present poised annihilation of assorted arsenals and their recent missile-rattling from fools and lunatics, an hour and a half spent with a handful of kids in a sunny day on a country road may help you realize why you originally started biting your fingernails. They used to issue us I.D. bracelets that had your name, address and a letter—P for Protestant, C for Catholic, J for Jewish. The idea for the letter was to help get your nuked corpse buried in the proper cemetery! Typically thoughtful Pentagonic witlessness: who’d be left alive and able to use the shovels or run the bulldozers? 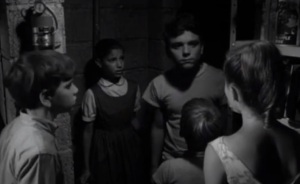 Duck and cover?  Panic In Year Zero! Fail-Safe. Dr. Strangelove. The War Game. The Bedford Incident. Thirteen Days. Threads. The Day After. How I Live Now.  At the end of On The Beach, flapping in the fallout is the unheeded message “There is still time, Brother“.  Is there?