MAN OF CONQUEST has Mexican dictator Santa Anna (played in sneer mode by C. Henry Gordon) declare with sinister sincerity as he prepares to attack the Alamo: “We’ll give them something for all rebels to remember.”  True enough, El Presidente, but how many sons of the Lone Star recall Republic Pictures contribution to 1939’s celebrated cinema cornucopia? The 2nd-rank studio put some effort into this one, vouchsafing a $1,000,000 budget trying to break into bigger gamestakes against the majors. It managed Oscar nominations for Music Score (Victor Young), Art Direction and Sound, and grosses tallied $2,200,000, ranking 105th for the year. While this included clumsy scenes of the 1836 siege of the Alamo, that was only because they’re part of the script’s main mission: a grade-school version of the life of Texas hero Sam Houston, played by Richard Dix. *

Directed by George Nicholls Jr., the cut & paste screenplay was laced together by Wells Root, Jan Fortune and E.E. Paramore Jr. In episodic and stilted fashion the telling mixes fact with fuzz as it covers speech-spoutin’ Sam into romance, sour and sweet, with first wife Eliza Allen (Joan Fontaine), and third Margaret Lea (Gail Patrick); through friendship and quarrel with Andrew Jackson; finally leading Anglo settlers in Mexico’s province of Texas into revolt against Santa Anna, the “Napoleon of the West”. Sam’s legendary drunkenness is left out, as is his second marriage, and later estimable service in Texian politics.

Dix is stalwart and dull, the supporting cast includes blabber-dispenser Gabby Hayes, and the big set-piece, after a lot of chatter and the cut-rate Alamo interlude, is Sam’s rousing victory mop-up of arrogant Santa Anna at San Jacinto, about an hour from the present day megalopolis that bears Houston’s name.

Though the large-scale San Jacinto sequence is burro puckey for accuracy, 2nd-unit director “Breezy” Eason at least made the action furious, his stunt crew staging some wincing horse falls. Among the risk-takers on that team are the legendary Yakima Canutt, Cliff Lyons (later to stage grand battle scenes for John Wayne’s The Alamo), athlete Jim Thorpe and rangy 23-year-old George Montgomery, about to swap  bruises for a five-decade career as an actor. Edith Head gained her first credit as costume designer on this picture. 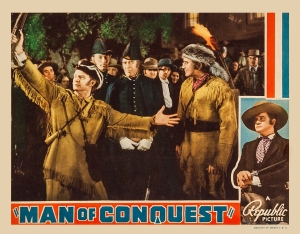 * Have Dix, will Rabble—much more vital in real life, on the big screen Sam Houston has been growled across by Hugh Sanders in The Last Command, Joel McCrea in The First Texan, Richard Boone in 1960’s The Alamo, Dennis Quaid in The Alamo of 2004. Made-for-TV hoo-rah’s saw him done by Stacy Keach (Texas), Sam Elliott (Gone To Texas), Robert Stack (The Honorable Sam Houston), Lorne Greene (The Alamo: Thirteen Days To Glory) and Bill Paxton (Texas Rising). Boone and Quaid fared best, as did the spectacular and exciting movies they were part of.