ROGUES’ REGIMENT is a decently written, astutely directed and capably acted noirish adventure actioner from 1948, one of a number of post-war stories that dealt with Nazi-hunting. It’s also the first movie go at the fast-developing national vs. colonial conflict in Vietnam, then French Indochina. Dick Powell stars, with Vincent Price, Märta Torén and Stephen McNally. *

Powell plays American intelligence agent ‘Whit Corbett’, sent to Saigon in pursuit of a Nazi bigwig who escaped being tried for war crimes at Nuremberg. With no photograph of the wanted man, Corbett must ferret him out from a number of former German soldiers who signed on to the French Foreign Legion after the war. Corbett joins the outfit, undercover. Price is antique dealer/smooth fixer/gun runner ‘Mark Van Ratten’ (does the name indicate his morality?), Torén is Corbett’s elegant outside contact ‘Lili Maubert’, and McNally is ‘Carl Reicher’, the SS prey. On hand for regional flavor are all-Asia stalwarts Philip Ahn and Richard Loo. They’re all low-key and effective.

Robert Florey directed a script by Robert Buckner. Florey was noted for being a proficient pilot of B-pictures, but also had to his credit quality items like Murders In The Rue Morgue and The Face Behind The Mask. Buckner was a script vet (Jezebel, Dodge City, Yankee Doodle Dandy) as well as a successful producer. His screenplay is thoughtful enough to give the Viet Minh faction valid argument against the French colonialists (America still making up her mind who to back—before blowing it), and doesn’t simply lay everything on Stalin’s doorstep (that would soon change). There is some fudging about French acceptance of questionable German volunteers into the legendary escape hatch of the Legion. 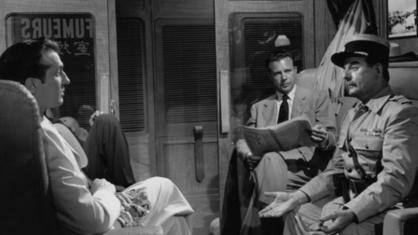 Florey’s direction keeps it taut and atmospheric, with keen use of tension-accenting shadows in the cinematography from Maury Gertsman. Daniele Amfitheatrof provides a subtly evocative music score. Good action scenes: one a patrol ambush in the jungle, another a vicious hand-to-hand fight in an alley.

* Digging out fascists after the shooting stopped: late 1945’s Cornered (also with Dick Powell), The Stranger (1946) with Edward G. Robinson, Loretta Young and Orson Welles, and also from ’46, the best-known and most-successful, Hitchcock’s Notorious, with Cary Grant and Ingrid Bergman. Down the road came Operation Eichmann, The Boys From Brazil and The Odessa File.

As for the fighting in/for SE Asia, specifically Vietnam, unless my feelers are bent, this may be the first flick to figure, with more following after the French defeat in 1954. There was the Alan Ladd item Saigon, also turning up in ’48, but that was a mill-run crime saga which didn’t tarnish  crime with politics.

** Interesting, offbeat Swedish actress Märta Torén’s brief career came to a sad and sudden end when she died of a cerebral hemorrhage at the age of 30.  She made 11 American films between 1948 and 1952.