PRIVATE HELL 36 clues you in for starters that “A policeman, unlike most men, lives close to evil and violence. He can, like all men, make his own private hell. The good pass through it with minor burns. The evil stumble and fall. And die in strange places.”

When phony 50-dollar bills start turning up in Los Angeles, cops ‘Cal Bruner’ (Steve Cochran) and ‘Jack Farnham’ (Howard Duff) are given the case. Jack is a straight shooter, trying to make ends meet with wife ‘Francey’ (Dorothy Malone), baby and bills. Cal is a looser cannon, and tracking the fake bills leads him into mixing it up with sexy, smart aleck lounge singer ‘Lilli Marlowe’ (Ida Lupino). Then the case breaks wide open when the partners corner the buck-passer and find a case full of loot, from which Cal “deducts” a cool $80,000. Uh-oh… 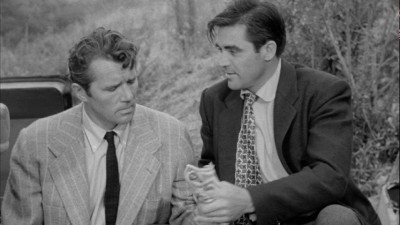 “Ever since I was a little girl, I dreamed I’d meet a drunken slob in a bar who’d give me fifty bucks and we’d live happily ever after.”

Lupino co-wrote the tasty script with her ex-husband Collier Young, who served as producer; Don Siegel, fresh from fanning Riot in Cell Block 11, directed. Aces all the way, from the violent brawl at the beginning, through steamy clinches twixt Steve & Ida, a car chase with requisite auto-meets-ravine climax, fraying friendships and the department wising up. 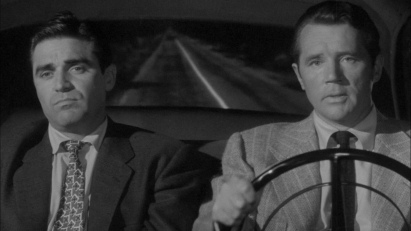 Duff is solid as the honest half of the team, unable to handle the guilt of knowing his partner’s crooked, Malone is okay signaling distress as the worried wife, but the movie belongs to Lupino’s been-there dame and Cochran’s casual conniver: they sizzle and snap with sultry attitude and brawny arrogance. *

This tidy item placed 143rd among the year’s releases with a gross of $1,200,000. That doesn’t seem like much, but may well have been sufficient to cover the production tab, since the sets are so minimal and the race track crowds at Santa Anita were free, leaving just cast & crew salaries, and one demolished 1947 Packard.

With Dean Jagger (the boss who smells something not quite kosher with his “boys“), King Donovan, Richard Deacon, Dabbs Greer, James Anderson. 81 minutes. 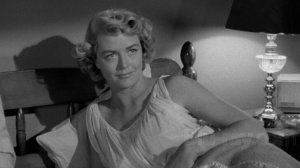 * The dialogue director was 29-year-old David Peckinpah, who later dropped David for one of his three middle names: Sam.

“Rice is for eating, not throwing.”

Speaking of private hell—learning the ropes, Our Man Sam may have been bemused by the wrestling matches behind the scenes and above his pay grade. Lupino and producer/writer Young were divorced but still working together as they’d done on several projects for ‘The Filmakers’, their independent production company.  Wed the same month she divorced Young, Lupino and Duff had been married for three years (their daughter plays Duff & Malone’s baby). During the shoot, Ida had a fling with Steve, legendary for trying to bed every actress within reach. Was Howard picking up on something extra in the scripted grapples between his wife and their co-star? In his memoir, director Siegel remarked on constant squabbles between parties, as well as a more than normal quota of boozing. 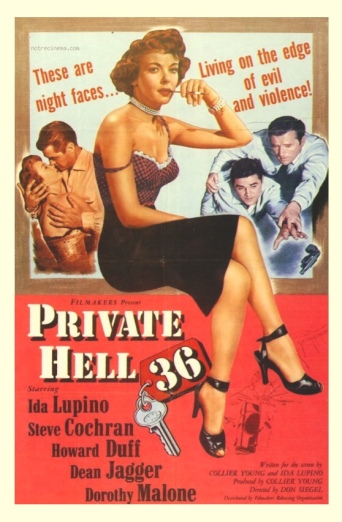