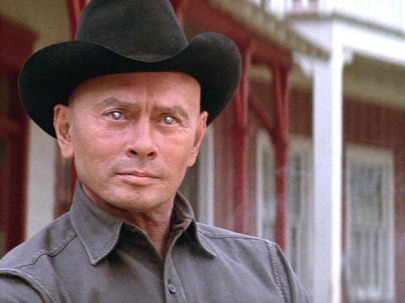 WESTWORLD, diverting man v. machine, genre-bending thriller from 1973, written & directed by Michael Crichton (his first feature), was the most successful of the year’s small number of science-fiction entries, unless you count Woody Allen’s future-farce Sleeper. *

In ‘1983’ ‘Peter Martin’ (Richard Benjamin) and his buddy ‘John Blane’ (James Brolin) visit ‘Delos’, an adult amusement park featuring three theme “worlds” where humans can act out their fantasies with lifelike programmed robots. As sex & violence are oddly favored over sewing and ping pong, it seems like vacation could become vocation. Picking Westworld over Medieval World and Roman World, the guys have carnal relations with willing bargirls, break up a saloon in a barfight, and win bloody shootouts with a resident android gunslinger (Yul Brynner). What could go wrong? 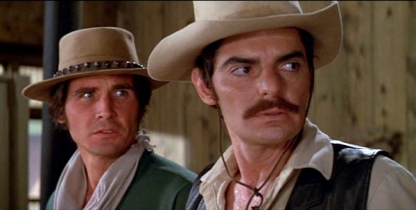 Though only running 88 minutes, it could have used a bit more trimming, with the saloon fight going on too long, and a jail break scene that also falls flat. MGM stinted on budgeting, allowing only $1,200,000 (with a scant 75 grand for sets), with the result that it looks more like an elaborate TV show than a movie. Conversely, it benefits from Fred Karlin’s lively score and good input from the sound effects crew.

The cast sell it better than the bluntly obvious action. Taking a break from paying bills on TV (co-starring for seven years on Marcus Welby, M.D.), Brolin follows up a neat role in Skyjacked by playing the relaxed theme park veteran (his character back for another visit) to Benjamin’s nervous newcomer. Benjamin does well: he needed a hit after Portnoy’s Complaint and several other duds where he was basically a whining schmuck: he was also fine that year in The Last Of Sheila. Though he has a smaller role, since he was a bigger star (or had been) Brynner gets first billing, and is dressed and poised to recall his classic gunslinger hero from The Magnificent Seven. Outfitted with glinting android orbs, his murder-bent robot has definite homicidal heft. Yul needed the payday, as he was on a long career slide that had been drawing out agony for a decade: it was fun to see him back in the saddle. Supporting players Dick Van Patten and Norman Bartold are amusing as other guests, milquetoast types enjoying a brief alternate existence as studs. 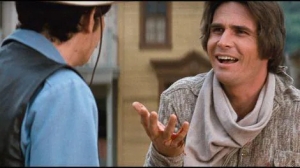 Novelty brought in crowds to make it the 18th most popular picture of the year, grossing $21,000,000. With Alan Oppenheimer, Terry Wilson, Majel Barrett, Victoria Shaw and Steve Franken.  Followed three years later by Futureworld. A TV series began in 2016.

* The Future According to 1973 didn’t offer much: Battle For Planet Of The Apes, Soylent Green, and The Neptune Factor. Expert at writing about science, medicine and/or technology run amok, Crichton as a director did better with Coma and The Great Train Robbery. 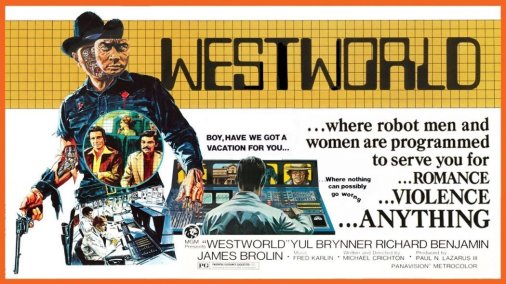