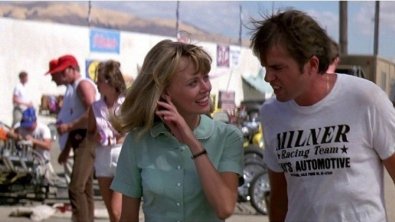 MORE AMERICAN GRAFFITI tagged its mark on the nostalgia block in 1979, six years after we left the hopeful, jocular kids of 1962’s Modesto, California to their destinies. The little, low-budget picture that five studios turned down as loser had stuffed suits eating crow when American Graffiti became a monster hit, an instant, enduring Americana classic. The tardy but still ambitious sequel was directed & written by first-timer Bill L. Norton, under the aegis of Graffiti‘s dad, George Lucas, acting as executive producer. Though inking a disappointing 43rd in ’79’s box office stats was the movie equivalent of a ‘Generation Gap’ from the original’s #3 in ’73, it was hardly a flop, grossing $21,500,000 against a $3,000,000 cost. But critics lambasted it, and an undeserved bad rep has besmirched it for decades. 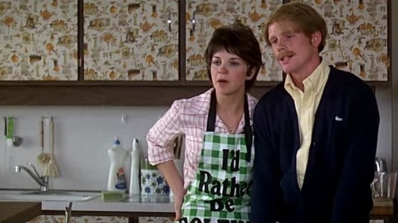 Over a quartet of New Year’s Eve’s, most of the characters we met (and warmly recognized) in American Graffiti return. On the Dec. 31st of ’64, ‘John Milner’ (Paul Le Mat) is racing cars at a Fremont drag-strip track when old friends stop by. ‘Steve’ (Ron Howard) and ‘Laurie’ (Cindy Williams) are married, expecting a baby. ‘Terry’ (Charles Martin Smith) is in army uniform, about to ship out; he’s with ‘Debbie’ (Candy Clark). Cut to the last day of 1965 and find Terry, miserable, in Vietnam, ready to do anything to get out of the war. A jump to 1966 reveals free spirit Debbie as a hippie chick grooving the rock scene in San Francisco, along with little rebel ‘Carol’ (McKenzie Phillips), now going by ‘Rainbow’. The adios to 1967 shows Steve and Laurie’s marriage frazzled by money, work and two kids; their arguing inadvertently propels Laurie into the middle of an antiwar protest.

Along with the cast members above, Wolfman Jack (via his voice) returns, for the ’64 segments, and Harrison Ford (in the interim he’d become a big star) does a ’66 bit as ‘Bob Falfa’, now a cop. Several bit players from the first film show up, and fave Bo Hopkins repeats his amiable hood ‘Joe’, the ‘Pharaoh’, in the Vietnam section. Noticeably absent is Richard Dreyfuss (his ‘Curt’ away in Canada), who declined to sign on.

The four plotlines were each shot in a different film format to highlight a distinct emotive tone relative to the year, locales and attitudes. Throughout the 111 minutes, the timelines switch back & forth, accompanied, as in the original, by a plethora of period pop tunes selected for the particular scenes ambient moods.

Though it isn’t nearly as fresh, felt, funny and smoothly unified as its predecessor’s paean to the past, and has editing and likelihood issues, the good stuff outweighs the flaws. The vitriol dumped on it, then and still, is just asinine overkill, mirroring the Vietnam segment’s logically absurd but painfully accurate display of overwhelming firepower against a noise in the grass. The weakest links are an excess of boring drag-race material in the Milner episode, and a ridiculous barroom brawl and some overdone ‘fun-vandalism’ (knocking over garbage cans with a van) in the Haight Asbury material. 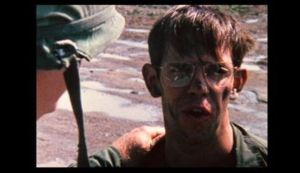 On the plus side, it’s a pleasure to see everyone back, fully in character, and they’re all good: the characterizations from the first cruise so embodied by the very likable actors that it’s like seeing old friends. Le Mat’s ‘local hero’ is still ingratiating; Smith’s once-naïve klutz ‘Terry the Toad’ is now matured by enduring serious, officially sanctioned insanity; Steve and Laurie’s frustrations as an overwhelmed young couple are honestly handled; Debbie’s serial sincerity a flower looking for the right garden. The Vietnam segment is bolstered by Richard Bradford, as the kind of prick officer begging to be fragged. Hands down, the charm prize goes to Anna Bjorn, a 24-year old model from Iceland making her acting debut as ‘Eva’, an exchange student that Le Mat’s Milner is bewitched by. He’s not alone; Miss Bjorn is so pretty it hurts, with eyes, smile and manner that could melt a glacier.

The forty-five classic songs on the soundtrack each carry a memory charge, and underlying all the social activity is an inescapable sense of loss. That’s partially because going in—thanks to the earlier film—we know the fates of some of the characters, but it’s also an ache for the animating spirit of the times, a hopefulness that today is perilously close to vanishing.

Candy & McKenzie (Debbie & Carol) ready to turn on, tune in, drop out