JUMP INTO HELL was a low-budget 1955 attempt to turn a humiliating military and political catastrophe into a battle cry for freedom. David Buttolph’s score starts it off with a dramatic flourish, then the script by Irving Wallace plops us one year earlier into northern Indochina. Cut off, an outnumbered French force is surrounded by the Communist Viet Minh at a place called Dien Bien Phu. Situation: merde.

Four officers of the French Foreign Legion parachute in to join the fight. Flashbacks key on their personal reasons for serving (someone page the two women in the cast). The doomed heroes are played by Jacques Sernas, Kurt Kasznar, Peter van Eyck and Norman Dupont. Arnold Moss covers the role of a non-fiction fellow, the garrison commander Gen. Christian de Castries.

David Butler directed. Fresh off several successes (April in Paris, By The Light Of The Silvery Moon, Calamity Jane, The Command, King Richard And The Crusaders), Butler manages by mixing staged action scenes (done at the Janss Conejo ranch property in Thousand Oaks, California) with a hefty helping of documentary footage. In the opener, Gen. Castries stakes the moral high ground (French Colonial version) by lecturing a fanatical Commie prisoner: “Free a neighbor from any hope of democracy! To turn all Indochina into a Chinese and Russian slave… producing for conquest. It will deceive no one. All Asia will soon learn the truth, will learn your motives.”

Of course, since this was 1955, and proclaimed via Warner Brothers, “motives” of the faceless enemy hordes don’t include anything beyond monolithic Communist aggression. The oily bouillabaisse the script ignores is that ‘civilized’ France ruled “French Indochina” (Vietnam, Laos and Cambodia) like a private fiefdom for a century: maybe the people who were actually from those places might want their countries back? Never fear, what France fumbled, Uncle Sam, Inc. got around to, doing a bang-up job a decade later. * 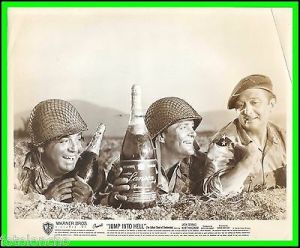 Save some of that bubbly for Algeria, mon ami.

* Commie-clobbering’ in ’55—Blood Alley (Duke sees that a village escapes to Hong Kong), Trial (at home, Glenn Ford fights ’em in the courtroom),The Prisoner (Alec Guinness gets a show-trial in Eastern Europe), The McConnell Story (Alan Ladd scorches MIGS in Korea), Soldier of Fortune (Clark Gable outruns ChiCom gunboats), and Strategic Air Command (Jimmy Stewart keeps B-52s Russkie-ready, 24/7). Until the mid ’70s only a trickle of films dealt with Vietnam.  A Yank In Indochina was a barely seen 1952 programmer. China Gate spewed action vitriol in ’57, The Quiet American was compromised in 1958.  In 1964 the now-forgotten A Yank In Vietnam was filmed on location, with Marshall Thompson, who appeared again in ’66 with the even scarcer To The Shores Of Hell. That year also provided Lost Command, with Anthony Quinn’s troops exchanging Dien Bien Phu for another winning proposition: Algeria.  The Green Berets landed in 1968.