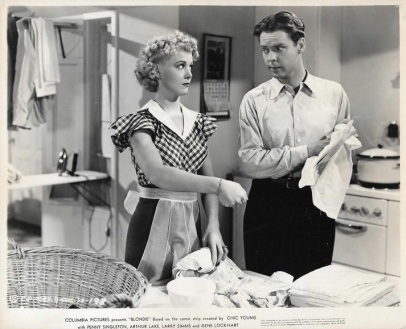 BLONDIE took cartoonist Chic Young’s wildly popular comic strip that he’d launched in 1930 and embodied it on film with this very funny 1938 B-picture, the first of 28 Blondie numbers Columbia Studios produced between ’38 and 1950. It was directed by Frank R. Strayer, who would handle a dozen in the series, and written by Richard Flournoy (he’d do eight). Endearing nostalgia buoyed by perfect casting.

‘Dagwood Bumstead’ (Arthur Lake), salesman at ‘Dithers Construction’, is given a nail-this-account assignment by his hard-nosed boss. Threatened by a bill collector, Dagwood is desperate. He’s also a dope, clumsier than a puppy, but is a well-meaning fella, and a family man, about to celebrate five years of marriage to ‘Blondie’ (Penny Singleton), vivacious and level-headed (well, more than her husband, anyway). She orders new furniture on credit, not realizing the financial pickle they’re in. Blondie and Dag dote on their little boy, the quip-equipped ‘Baby Dumpling’, and adore each other, but will their All-American decency and drive be enough to ward off All-American destitution? You betcha.

Lake, 33, had been in films, mostly shorts, since 1917: he found the role of his life in the decent, doltish Dagwood, a stand-in for millions of harried Joe Blow’s in the audience. Three-year-old Larry Simms would continue as son ‘Alexander’ aka Baby Dumpling, for the rest of the series, which topped off in 1950. Simms (1924-2009) later became an aeronautical engineer, so the Bumstead’s must’ve done something right. Former diplomat Jonathan Hale (1891-1966) would play ‘Julius Caesar Dithers’ in 16 of the 28 escapades. Hale was incredibly busy in ’38, appearing in 21 other movies. Crucial of course, is the title heroine, and no-one could ever take the place of the delightful Penny Singleton: pert, sexy, smart and sweet. Blondie’s all that, even if her light bulb flickers now and then. *

* The essential Penny Singleton: “I was the economical Claire Trevor. I just didn’t want to be typed. It goes to show you how you can eat your words. I became probably the most typed actress in the world. But, at least it had some dignity. I’m proud and grateful I was Blondie. She was dumb and shrewish sometimes. But she was real and sympathetic and warm, a real woman, a human being. And that’s how I tried to play her.”   Along with being the cute and cheerful gal a lot of guys would’ve been happy to come home to, Penny Singleton was a tireless union activist. She lived to be 95, passing from the scene in 2003.

Arthur Lake, like Dag, stayed with his real-life wife Patricia from 1937 until his death at 81 in 1987. Patricia was the daughter of William Randolph Hearst and Marion Davies, and was left $200,000,000 in Davies will. Dagwood got that raise after all.