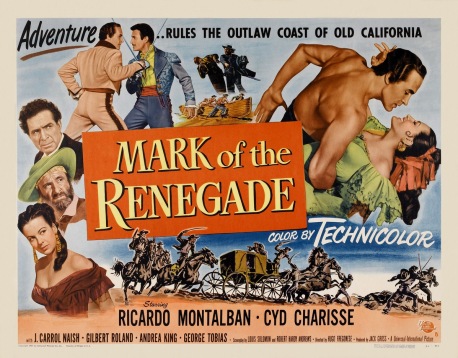 THE MARK OF THE RENEGADE, amusing adventure nonsense from 1951, can’t decide whether it’s tongue-in-cheek or serious, swinging back & forth between the two, doing okay by the former, straining with the latter. Directed by Hugo Fredonese, Argentinian-gone-Hollywood with some good credits (Black Tuesday, My Six Convicts, The Raid), the wordy, somewhat confusing screenplay by Robert Hardy Andrews and Louis Solomon was adapted from Johnston McCulley’s 1939 novel “Don Renegade”. McCulley was the creator of Zorro, and this fable is a thinly masked (cough) re-tool of that caudillo-confounding character.

Old Mexico’s California, 1825. ‘Marcos Zappa’ (Ricardo Montalban, 30 and buffed) escapes pirates only to be drawn into a plot by ‘Don Pedro Garcia’ (Gilbert Roland, 45, no slouch at swordplay) who plans to become emperor of the much-desired province. Less-exalted but more understandable desire arises between the mysterious Marcos and magnetic ‘Manuella de Vasquez’ (Cyd Charisse, 29 and aaah). While the leads smolder and strut, comic relief is provided by J. Carrol Naish (droll) and George Tobias (bombastic). 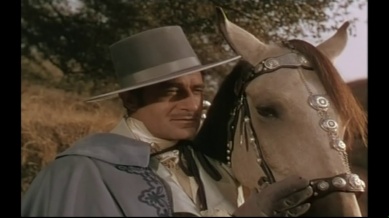 The over-complicated plotting, tone wobbles and budget-constrained sets don’t help, but the matinee fare has several pleasures to reward indulging. First and foremost is Montalban’s assured panache as the hero, a reminder that he carried enough presence and style to lift even trivial material. The prolific and overlooked Frank Skinner provides a zesty, romantic score to keep the tale in the right thematic and period mood even if you can’t follow the script’s serpentine track. On that note, El Cyd is displayed in a flamboyant, kitschy dance sequence that makes a neat break from the chatter, even if it has more in common with randy 1950s Hollywood than sleepy 1820s Los Angeles. Her exquisite pins flash sexual innuendo at Ricardo, who joins her to display his own prowess at gallant footwork. * 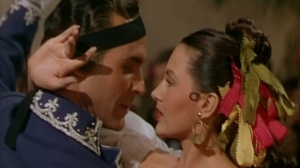 * Sleek and sinuous, Charisse and Montalban made with some serious moves in On An Island With You and Fiesta and also appeared in The Kissing Bandit and the hard-to-find Sombrero, which features Charisse at her most exotic.