THE AMERICANIZATION OF EMILY was James Garner’s favorite among the movies he made in  his five-decade career, and the character he played was likewise his top pick. He’d just done four successful comedies in a row as well as the classic The Great Escape. Like that rousing actioner and 36 Hours, a sober drama that followed this one, it’s set in WW2, but couldn’t be more different in tone and intention. Normally, the Defense Department and one or more of the services would lend support to a military-themed picture. But producer Martin Ransohoff found they wouldn’t touch this acid attack on “glory”, especially not when they were gearing up for an epic-sized, unheroic folly over in Vietnam. *

EMILY: “You brought me some chocolates.”   CHARLIE: “Two boxes of Hershey’s.”  EMILY: “Well, that’s very American of you, Charlie. You just had to bring along some small token of opulence. Well, I don’t want them. You Yanks can’t even show affection without buying something.”  CHARLIE: “Well don’t get into a state over it. I thought you liked chocolates.”   EMILY: “I do, but my country’s at war and we’re doing without chocolates for a while. And I don’t want oranges or eggs or soap flakes, either. Don’t show me how profitable it will be to fall in love with you, Charlie. Don’t Americanize me.”

England, 1944. As preparations for D-Day are being finalized, among the Americans swarming the country is ‘Lt. Cmdr. Charles Madison’ (Garner). Charlie is a “dog robber”, a crucial go-fer on the staff of a Navy admiral, slickly attending to his superiors every want or need. Since Charlie has no desire to see combat, it’s the perfect niche. He begins a romance with a local, ‘Emily Barham’ (Julie Andrews), who has lost three family members in the war. Charlie’s cynical attitudes and admitted cowardice offend her, but his bracing honesty and ready charm win her affection. Then the admiral, irked that the Army is getting too much attention, comes up with the wacky idea that “the first dead man on Omaha Beach must be a sailor“, that honor to help the Navy procure more funding from Washington. Suddenly, a wish for perks becomes a command for sacrifice, and valor-skittish Charlie is set to be dumped into an all-time crossfire hurricane. 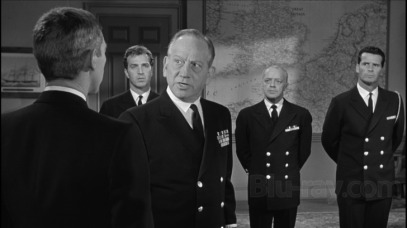 EMILY: “I believe in honor, service, courage, and fair play, and cricket, and all the other symbols of British character. Which have only civilized half the world!”   CHARLIE: “You British plundered half the world for your own profit, let’s not pass it off as the Age of Enlightenment.”

Directed by Arthur Hiller, the superb script by Paddy Chayefsky was a bastardized adaptation of a book by William Bradford Huie, who based his 1959 novel on his own WW2 experiences as a Seabee officer, including the D-Day landings. Huie’s book was a satirical look at military bureaucracy, but Chayevsky went beyond to craft—in the form of a deeply black comedy—a searing critique of the glorification of war, using Charlie’s pragmatic self-preservation to challenge blind obedience to lunacy and the self-deception that too often follows in the wake of waste. **

Garner, 35, eagerly grabbed the lead after William Holden (an expert at playing war cynics) bailed. Playing off his TV-honed Maverick persona and the ‘Scrounger’ he aced in The Great Escape, Garner is at the top of his game. The ‘Escape‘ was much more fun and exciting, and the epic but dull Grand Prix  would be his biggest box office hit, but his difficult, audience-prickly tightrope walk as the simultaneously disreputable yet likable Charlie—a real anti-hero– is his career-best acting. Likewise, winning newcomer Andrews, 25, gave one of her two best dramatic performances (along with Hawaii), but it was overlooked in the wake of her blockbuster musicals. 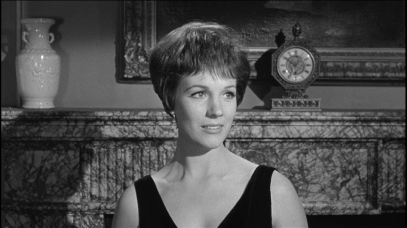 Flanking the well-meshed stars are two more superior characterizations. Melvyn Douglas is superb as the deluded admiral, whose grandiose dead-man-plan is so insane (and diabolically ingenious) it could only come from someone who won’t get shot at. James Coburn is a gas as Charlie’s immediate superior, who catches glory fever when sensing it’s also a shrewd move on the promotion track. The brief but spectacular sequence on Omaha Beach (the film’s sole action scene) only lasts a few minutes but the lavished props and special effects consumed fully 12% of the $2,700,000 budget. 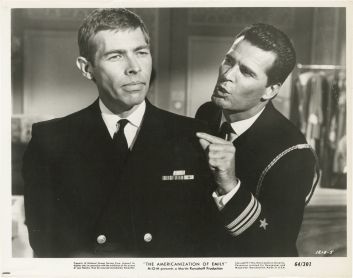 Oscar nominations went up for Cinematography and Art Direction. Reviews were good (now they’re glowing), but even Garner’s popularity and Andrews meteor zooming with Mary Poppins  could not make this a big hit. Cogerson places it 23rd for ’64, with a gross of $11,300,000. 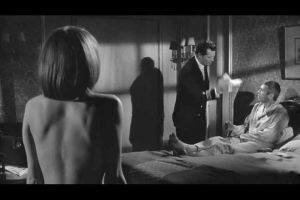 * Jim from “The Garner Files”, his frank and fun autobio: “The Americanization of Emily is my favorite of all the films I’ve done. Julie has said it’s one her favorites–as did Jimmy Coburn and Marty Ransohoff. Paddy once said that it was one of his two favorites, along with The Hospital….Most Americans who saw the picture were outraged by it. It was, after all, the first major Hollywood picture with a hero who was a coward….Audiences have come around to it, and it’s now a cult favorite and a minor classic. Unfortunately, it hasn’t put war out of style.” 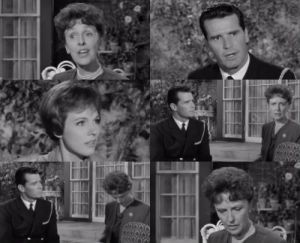 Garner was in the Korean War, and picked up a pair of Purple Hearts. Chayefsky, Coburn and Hiller wore uniforms in WW2. Douglas served in both World Wars.

“You American-haters bore me to tears, Miss Barham. I’ve dealt with Europeans all my life. I know all about us parvenus from the States who come over here and race around your old cathedral towns with our cameras and Coca-Cola bottles… Brawl in your pubs, paw at your women, and act like we own the world. We overtip, we talk too loud, we think we can buy anything with a Hershey bar. I’ve had Germans and Italians tell me how politically ingenuous we are, and perhaps so. But we haven’t managed a Hitler or a Mussolini yet. I’ve had Frenchmen call me a savage because I only took half an hour for lunch. Hell, Ms. Barham, the only reason the French take two hours for lunch is because the service in their restaurants is lousy. The most tedious lot are you British. We crass Americans didn’t introduce war into your little island. This war, Ms. Barham to which we Americans are so insensitive, is the result of 2,000 years of European greed, barbarism, superstition, and stupidity. Don’t blame it on our Coca-Cola bottles. Europe was a going brothel long before we came to town.” 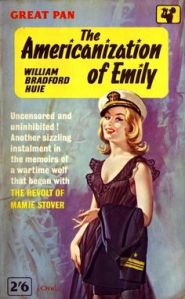