THE TRIP — American-International Pictures, after soaking us with the bingo of the ‘beach party’ series, seized the cultural tide by the bell bottoms and unleashed both the biker cycle and their more peaceful dropout counterweight, the flower-powered rebels of the mind zone. Fewer in cinema numbers than the Harley hellions, the day trippers nonetheless said where their head was at, and if you were within a strawberry alarm of groovy, you could relate, man. From 1967’s Summer of Love, directed by Roger Corman, written by Jack Nicholson, this tab of psychedelia Californicus begs the question: if you were going to drop acid for the first time, would you really do it with Bruce Dern?

“You’re stoned out of your mind, aren’t you? Oh man. What’s the matter with you guys, isn’t the real world good enough for you, love freak?”

Peter Fonda (we start grinning already) is ‘Paul’, a laid-back director of TV commercials in turmoil over divorcing’ Sally’ (Susan Strasberg), his bed-straying wife. Seeking answers from the garden of chemical engineering, he takes his first LSD trip. Initially, he’s under the calming care and guidance of a shrink, the guru-ish ‘John’ (Dern), at John’s Hollywood Hills home. After they partoke of a “freak out” at another dude’s pad (‘Max’ is Dennis Hopper; that grin getting mixed with a justified scent of paranoia), Paul ventures further, and the light and space of Sunset Strip really put the zap on his head. Body paint. Willing hippie chicks. Malibu. Dwarves—who doesn’t see them when high? and why are they always a portent? Strobes, medieval trappings, a gaze into a washing machine…

The once novel quick-cut editing, montages, light effects and color schemes depicting Paul’s improved/impaired visuals are now carbon-dated, but they retain flashback cred as amusing relics of the time; Laszlo Kovacs was the cinematographer. Music is provided by The Electric Flag. You have to put up with Hopper, but Nicholson’s script is serious, Fonda is better than usual, effectively reflecting Paul’s reactions (takes one to know one) and Dern is very good, refreshingly gentle and sane as the thoughtful shrink. The Sunset Strip scenes work well, but the loopier stuff with masked horsemen pursuing Paul around Big Sur and into the familiar caves of Bronson Canyon is a trip too far. * 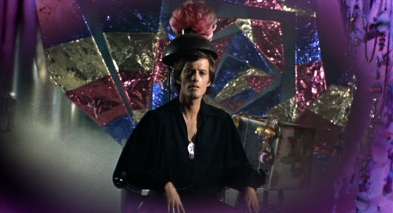 “That’s the sun in my hands, man! Oh, it gives off an orange cloud of light that just flows right out over the sea! Wow!”  Spoken while holding an orange. If he’d held a rutabaga, it would have just confused the audience. 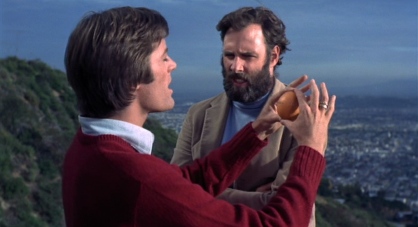 With Barboura Morris, Luana Anders, Dick Miller, Michael Blodgett, Angelo Rossito. Somewhere in the crowd, among the kaleidoscopes and various vibes, lurk Peter Bogdanovich (27, not yet a director) and Brandon De Wilde (a long, strange road from Shane). 85 minutes, more than enough time for it to come on, unless someone ripped you off, man.

* A blurb on the INDb tells us Nicholson, Fonda and Hopper “prepared” by taking LSD together. Well, duh. Also that Fonda became visibly aroused filming his nude sex scene with Salli Sachse. And you thought his acting was wooden? According to Corman’s autobio, the whole crew took doses, in shifts.

Strasberg ,Hopper and Dern dropped out again (“in, out, let’s get crackin‘”) the following year in the goofier Pysch-Out. On a personal experience note: while wigging out in a laundromat must be a real bummer, I have it on good authority that peaking while being stuck for an hour in a Sherwin Williams paint store isn’t the best way to incense a peppermint, either.