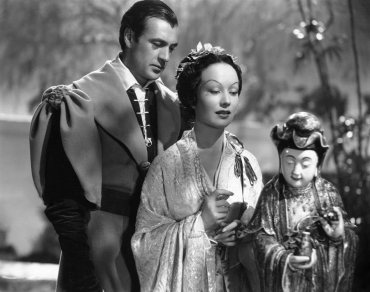 THE ADVENTURES OF MARCO POLO, an epic quarter-century sojourn that sparked imaginations in the Middle Ages, have never translated well on the screen, with this goofy 1938 Hollywood version the best of a sorry lot. After a string of critical and box office successes, ever-ambitious producer Samuel Goldwyn let his hutzpah get the best of his sechel with this expensive and campy outing, starring all-American Gary Cooper as the 13th-century Venetian wanderer. 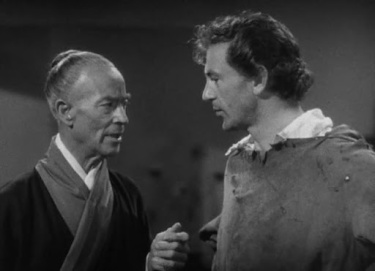 Look, my young not-Italian friend, I was in Lost Horizon, so you trust in my wisdom and instant knowledge of your native language

Written by the estimable playwright and wit Robert E. Sherwood, the free & easy screenplay was based off source material from Capt. N.A. Pogson,”famed British Orientalist and worldwide authority” on Polo. Tone is set by referring to Polo as “the first travelling salesman” and showing him to be a Casanova-type ladies man in Venice. Casting Cooper must’ve gotten giggles going in tinsel town, since Gary, unbeknownst to the public, was one Hollywood’s premiere footsie players. In her debut, the leading lady was 26-year-old Sigrid Gurie, a Goldwyn ‘discovery’. She was pushed as a “Norwegian Garbo” and “the siren of the fjords”, but that backfired when the press found out she was actually from Brooklyn—Flatbush, to be exact. Goldwyn then claimed to be a victim of “the greatest hoax in movie history”, dumping blame for the movies flop onto the hapless actress. Unfair, as the striking Gurie isn’t bad, saddled with playing ‘Princess Kukachin’ (whatever…): it’s the whole package around her that is synthetic and silly. Coop survived with a string of classics, her career was short-lived. 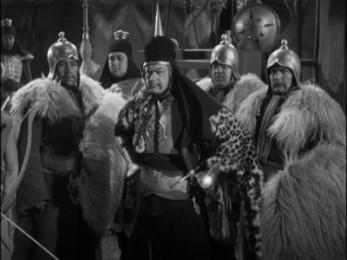 Fur-bearing fear-makers of the East

Though $2,000,000 was thrown around, the sets don’t convince, action is sparse, dialog cheesy. John Cromwell bailed as director after less than a week, to be replaced by an uninspired Archie Mayo. The lead baddie is Basil Rathbone, whose way with imperious villainy was put to better use that year against another medieval hero in The Adventures Of Robin Hood. One wonders if his agent pushed him to go for broke in the year’s third ‘Adventures’ picture, The Adventures Of Tom Sawyer, but whether Basil would’ve made a convincing ‘Injun Joe’ is doubtful. 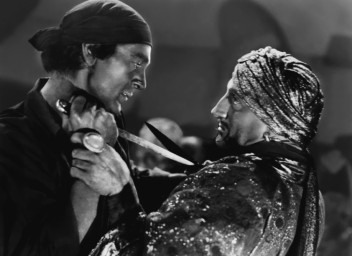 Judging by this still, they’re either fighting or making up

Cooper handles it as best he can. George Barbier is amusing as ‘Kublai Khan’. 16-year-old Lana Turner shows up to tease as a maid. The best feature is the full-bodied soundtrack: musical director Alfred Newman gave the OK for orchestrator Hugo Friedhofer to take composer duty for his first full-length score, and he does a bang-up symphonic job.

Ambling into 33rd place in ’38, a gross of $4,500,000 was still not enough to cover the outlay; the resultant loss tallying a bruising $700,000. With Ernest Truex (lame comedy relief), Binnie Barnes, Alan Hale (hearty as usual), Stanley Fields, Harold Huber, H.B. Warner (once again sage, as in Lost Horizon). Ward Bond is in the scruff playing a Mongol guard. 100 minutes. 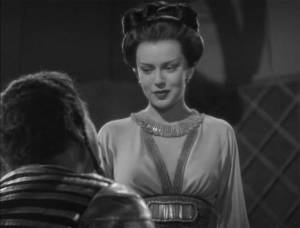 “That IS Lana Turner…”

* As a favor to Goldwyn, John Ford, who had just delivered Goldwyn a hit with The Hurricane, did a stint of 2nd-unit work: “I went for six days and did this stuff with Gary Cooper which I think gigged up the picture a bit. I wasn’t paid for it.” Ford’s stuff has Polo crossing the Himalayas during a blizzard. 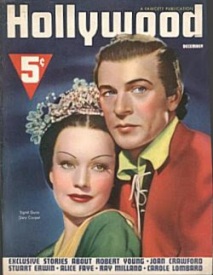 Polo was 17 when he left Venice for China. Cooper was 36, five years younger than Marco was when he finally returned to Italy. Putting aside Polo’s classic account from 1300, “The Travels Of Marco Polo”, and all attending controversy over its claims and accuracy, for a fun fictional dive into his wanderings, try Gary Jenning’s 1984 opus “The Journeyer”, 782 lusty pages worth.

The movies have never done him justice. The Fabulous Adventures of Marco Polo, a 1962 attempt with Alain Delon, Dorothy Dandridge, Mel Ferrer and France Nuyen, was never completed or exhibited. Its producer used some footage from it in 1965’s Marco The Magnificent, featuring Horst Buchholz, Anthony Quinn and Omar Sharif: it flopped. 1973’s Marco mixes live action with animation and songs and foists Desi Arnaz Jr., Zero Mostel and Jack Weston; a hard sell that nobody bought. There was a ridiculous TV miniseries in 2007 with Brian Dennehy as Kublai Khan. ‘Nuff said. 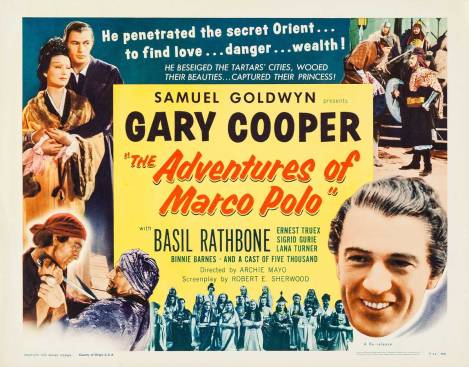