THE BROTHERS RICO find out the hard way just how far loyalty really extends when it comes to organized crime, in this thoughtful, well-regarded 1957 B-flick, directed by Phil Karlson, adapted from a short story by French crime novelist Georges Simenon. Karlson added this to the string of respected crime pictures he helmed throughout the 50s; in this entry violence is kept to a bare minimum, but threat is omnipresent, tension inexorably escalating through well-delineated conversational confrontations. “You have my word” meets “strictly business”.

In Miami, prosperous laundry business owner ‘Eddie Rico’ (Richard Conte) and his affectionate wife (Dianne Foster) hope to adopt a child. Then past & present collide: he used to do accounting for an underworld outfit and they’re asking a favor. That request turns out to be the whereabouts of his brothers ‘Gino’ (Paul Picerni) and ‘Johnny’ (James Darren), still connected to the favor-seekers, who worry the two will spill beans to investigators. Desperately traveling back & forth across the country to locate his targeted siblings, Eddie realizes that old-fashioned honor is out-of-date in the ruthless business model now in use by his former “friends.” 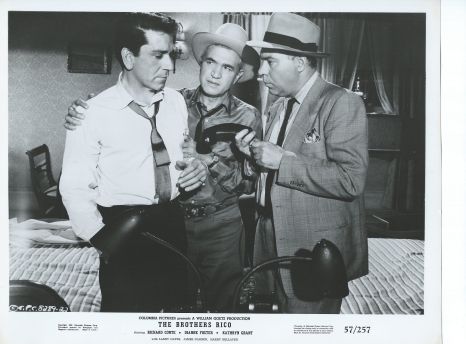 Though the Rico’s are obviously Italian, in keeping with moviedom’s coy (self-insulating) omerta of the pre-Godfather days, the names Mafia or Cosa Nostra are absent. With few exceptions (1950’s The Black Hand, 1960’s Pay Or Die), for decades screenwriters relied on non-ethnic shields like “the Mob”, “the Syndicate”, and “the Organization”. Here, the script by Lewis Meltzer and Ben Perry, with blacklisted Dalton Trumbo pitching in, does the expected C.Y.A. as well; the Rico’s overlord (expertly played by Larry Gates) going by ‘Sid Kubik’ (the Czech-Slovak-Polish crime wave?), with underlings like ‘Gonzales’ and ‘Wesson’ spliced in among ‘La Motta’ and ‘Tucci’ just to keep everything small-d democratic. That caveat in place, the script scores by aligning the gangsters dispassionate crushing of anything that might violate “business” with the soulless corporate leviathans that strangle us today. With the now-accepted shredding of trust by government, political parties, banks and media, that old-time leg-breaking “honesty” of the Capone’s, Genovese’s and Gallo’s feels downright nostalgic.

The dialogue is intelligent, the acting mostly solid. Aside from Kathryn Grant’s excessive histrionics as Darren’s hysterical wife, the only smudge comes in the last few of an otherwise compelling 92 minutes: a tacked-on happy ending feels like a sellout. With Argentina Brunetti, Lamont Johnson, Paul Dubov, Rudy Bond, Richard Bakalyan and William Phipps. Music score by George Duning.

* The Rico’s found their nervous spot in a ’57 gangland lineup that looked into Slaughter On Tenth Avenue, The Garment Jungle and Chicago Confidential. Plus there was wild card Baby Face Nelson, delivered with relish by Mickey Rooney.

Among his credits between 1952 and 1994, Larry Gates is best remembered as the condescending missionary in The Sand Pebbles and the latter-day plantation racist backhanded by Sidney Poitier during In The Heat Of The Night.

21-year-old newcomer James Darren’s career would blossom in movies (in Karlson’s fine 1958 western Gunman’s Walk, then Gidget, and The Guns Of Navarone), on TV (The Time Tunnel) and as a pop singer.(“Goodbye Cruel World”).

A familiar face since the late 40s, Paul Picerni would become Robert Stack’s #2 member of The Untouchables (Karlson directed the pilot, later released theatrically as The Scarface Mob). Besides dealing with hoods, in real-life Paul’s WW2 assignments included bombing the non-fictional bridge on the river Kwai.

Uh, Manhunt of the Century? Advertising on overdrive.