JOHN PAUL JONES may “have not yet begun to fight” on the deck of the USS Bonhomme Richard back in the evening of Sept. 23, 1779, but he sank like a lead weight in this 1959 flapdoodle, starring a resolute Robert Stack as the US Navy’s signature hero from the perilous days of the Revolution. The British didn’t cow the rebellious Jones but the rigid Stack is keelhauled by a terrible screenplay, limp direction and an expensive yet cardboard production. Big-dreaming producer Samuel Bronston corralled $5,000,000 for trappings and crew to play on, the first and by far weakest of Bronston’s half-dozen epics produced over five years. Critics put it in the brig and audiences gave it the coup de grace torpedo with a gross of just $2,400,000, #95 on the duty roster for ’59. Seasoned director John Farrow’s last assignment ended his career with a big wet “glub!” *

Filming mostly in Spain, with some work done in France, Scotland and Italy, Farrow co-wrote the script with Hollywood veterans Ben Hecht and Jesse Lasky Jr.—the scribe of eight gaudy DeMille epics, who seems to have held sway here. The opening credits, with Max Steiner’s thumping martial music backing a glide past the then-modern heavy cruiser USS Des Moines portend salty excitement, but things go below C-level as soon as someone speaks and never break the surface in the remaining two hours. Heavily fictionalized around the key incidents of Jones tempestuous career (and personality), the terribly conceived dialogue is grade-school pageant fodder, and the direction, of actors and action, is resoundingly flat, absent urgency or excitement. 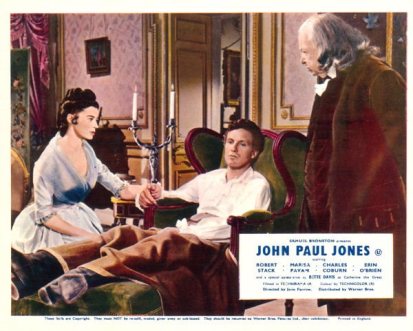 Stack, in humorless mode better suited to his Eliot Ness role on The Untouchables (which began the same year), fights a losing battle, and has two utterly vapid romantic interests in Marisa Pavan and Erin O’Brien. Charles Coburn and MacDonald Carey are bewigged-up, masquerading as Benjamin Franklin and Patrick Henry, along with Jean-Pierre Aumont as King Louis XVI. and , Tossed in for some Hail Mary class in the last ten minutes is Bette Davis as Catherine the Great.  Professional as they are, no one comes up well against the script; the best they can do is scrape some residue career dignity off the crayon-carved lines of statue-speak. Farrow gave his 13-year-old daughter Mia her first bit (she was officially “introduced” five years later in the excellent Guns At Batasi).

* Stack, from “Straight Shooting”, his entertaining autobio : “Doing the life of a major historical figure is a little like having your first love affair. The experience may be terribly meaningful for you, but your audience is usually less than satisfied.”

Farrow directed classic rousers Wake Island and Hondo, fun items like Five Came Back, and a number of entertaining actioners, but he was running on fumes—make that bilge—with this creaking vessel.

Warner’s warhorse composer Steiner always did well by marches, but his occasional penchant for excess dramatic theatrical flourish doesn’t help any here: he did much better the same year by The Hanging Tree, The FBI Story and A Summer Place.

The legendary Samuel Bronston went on to lavish sums on King Of Kings, El Cid, 55 Days At Peking, The Fall Of The Roman Empire and Circus World. 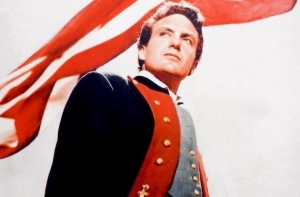