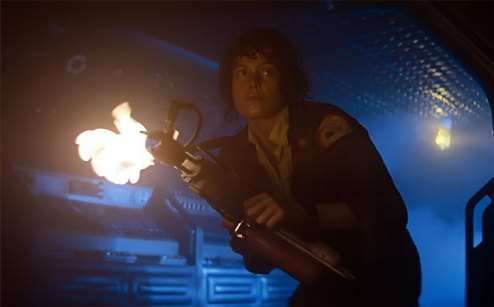 ALIEN didn’t merely tap into the public’s terror chest in 1979. It ripped it wide open, taking the realm of cosmic adventure out of Star Wars exuberance and into a darker region, the black wormhole of dread. It wasn’t the first monster-on-a-spacecraft flick, but the others were B,C or D movies mostly regarded as jokes by the few who saw them. This was an A-ticket to extraterrestrial hell, and legions took the trip. No figures are available for how many audience members gagged on their popcorn, but enough volunteered for punishment to make it the years 2nd most attended venue, queen-seeding a legacy of visceral voyages. *

“You still don’t understand what you’re dealing with, do you? The perfect organism. Its structural perfection is matched only by its hostility.” 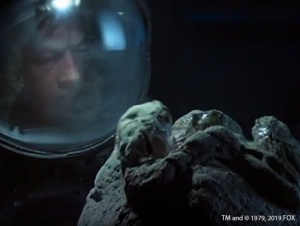 In the 22nd-century, the space freighter ‘Nostromo’ answers a distress call from a nearby moon. When the search party returns to the ship after checking out the massive wreck of an alien spacecraft, they bring along an uninvited visitor, some grotesque life form attached to the face of a crewman. Bad turns to Alamo when the facehugging guest quickly grows into a horrifying, seemingly unstoppable creature with a decidedly antisocial attitude.

The confusion and carnage that follow fuses the character names Ripley, Ash, Dallas, Kane, Parker, Lambert and Brett into sf-movie lore, embodied (then de-bodied) by Sigourney Weaver, Ian Holm, Tom Skerritt, John Hurt, Yaphet Kotto, Veronica Cartwright and Harry Dean Stanton. Though the dialogue doesn’t amount to much, the expert, perfectly picked cast create vivid personalities mostly out of how skillfully they project attitudes and display reactions ranging from chilly calm to meltdown hysteria. Everyone got a career boost, none more so than the willowy Weaver, 28-years old with only a few bit parts to her name. Ripley made her an icon. She blends patrician elegance and piercing intelligence with disarming candor and an explorer’s nerve: a heroine is born.

The Lost Patrol/Ten Little Indians plot hardly novel, the script merely adequate in terms of dialogue, riven with logic and common sense holes, let alone the needless sexploitation of Ripley’s strip-for-action showdown (not that we’re complaining), the film is really a triumph of direction and design. Ridley Scott, in his second time at command (after the superb The Duellists) marshals a nerve-wracking atmosphere for maximum tension through the component skills of the artists and technicians responsible for lighting, sound, editing, art direction, effects and music. The rarely glimpsed alien is one of the all-time great movie monsters. 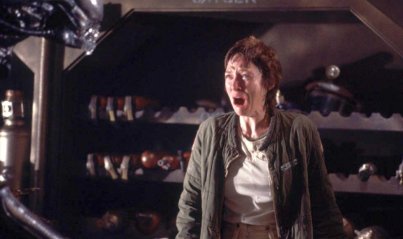 H.R. Giger designed the creature. Jerry Goldsmith, an old hand at creepiness (The Satan Bug, Planet Of The Apes, Logan’s Run, The Omen), provided the eerie score; the same year he gave the ‘Enterprise’ crew a memorable theme to soar by. Production cost was reported as $10,800,000. Oscar nominated for Art Direction, winning for the Visual Effects. 117 minutes.

* Edging out Alien for 1979’s #1 movie was another type of survival trauma, one too many felt firsthand, Kramer vs. Kramer.

Breaking up or breaking down, it appeared that In Space, No One Can See You Count, as box office figures for this critter occupy the asteroid belt. Assorted trust-us tally zones Cogerson, Box Office Mojo, The Numbers and IMDb each starlog different totals, ranging from $104,000,000 to $203,000,000.  Quite a spread, but wherever the digits topped out, it was more than sufficient to spawn sequels, prequels, spinoffs, TV shows and games.

Alien hatcher Dan O’Bannon said “,”I didn’t steal Alien from anybody. I stole it from everybody!”  As for who got there first, O’Bannon’s script (rewritten sans credit by Walter Hill and David Giler) off a story he wrote with Ronald Shusett, has a whiff of “Discord In Space” a 1939 story from A.E. van Vogt, and owes a little something to the 1958 B-movie It! The Terror From Beyond Space. Lest we forget—much as we try to—The Green Slime, Planet Of The Vampires, Night Of The Blood Beast. As to tortuous interpretations, ascribing sexual motivations and undertones to the fear factors, the sky—or one’s patience— is the limit. 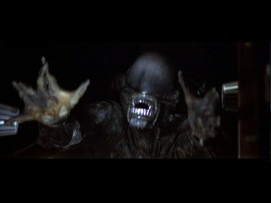 The rest of the cast were vetted pros (Cartwright had been acting since she was 10). With the central role, new kid on the ship Weaver only rated $30,000. By the time she made the 3rd sequel, with several blockbusters and three Oscar nominations in the bag, her pay was up by a suitably astronomical 36,657%.

“Final report of the commercial starship Nostromo, third officer reporting. The other members of the crew – Kane, Lambert, Parker, Brett, Ash, and Captain Dallas – are dead. Cargo and ship destroyed. I should reach the frontier in about six weeks. With a little luck, the network will pick me up. This is Ripley, last survivor of the Nostromo, signing off.    Come on, cat.” 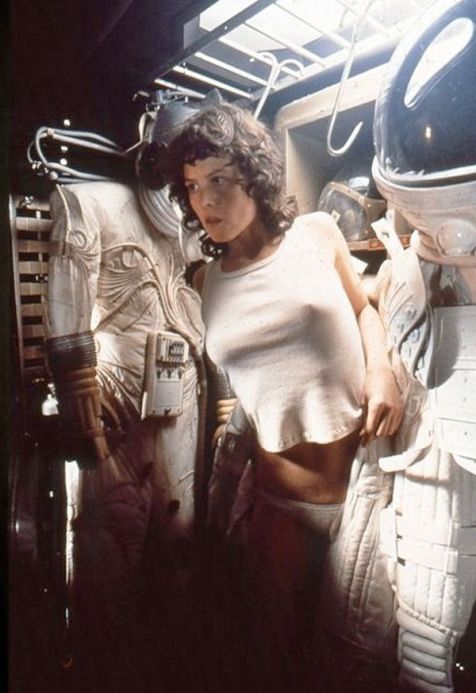