THE PAINT JOB, also known as Painted Heart, is one of those ‘lost’ films of which there is scant information available. A bizarre black comedy from 1992, it received little—if any—distribution, leaving its 90 minutes worth of weird to be discovered thru accident or by the intrepid. Written & directed by Michael Taav, the Picasso-painted job puts a small, offbeat cast into a series of progressively goofier vignettes revolving around a love triangle, with one participant revealed to be more darkly disturbed than the others.

A dark and unsettling opener just lays the fuse for the slow-burn payoffs that detonate as the story unfolds, some providing giggles, a few grabbing guffaws. Neuwirth, moonlighting from her brilliantly severe ‘Lilith’ on TVs Cheers, parlays puzzlement, caught between cuckoos, and Pastorelli is calmly creepy, augmented with hair that would stump a goat. Patton is a deadpan ace, his besotted Wesley a portrait of considerate bafflement, sincerely dim and openly closed. You’ll never hear “Margaret” said again with quite the same “quicksand” of depth.

Such reviews as it gets often lazily knock it for presuming to cut psyche lawns mowed by David Lynch (chiefly Wild At Heart), the Coen Brothers (not yet on the scene), even Being John Malkovich (which came out seven years later), as if they own Strange and intruders are fan-boy verboten. Some mistook it as a warped thriller and actually read it seriously. Contrarily, less smug ordinary Normal’s who’ve seen it and are smart enough to get the joke, chime in on the IMDb to laud its choice Odd, and the little crazypants foray has developed a small, slow-growing but smiling crew of followers.

With a pleasant score by John Wesley Harding and supporting nuggets from Ted Levine (unhelpful shock jock), Richard Hamilton (getting the biggest laugh as the old drunk who hates “sonsabitches!”) and John Diehl (mean dad at the beginning). Paint fight! 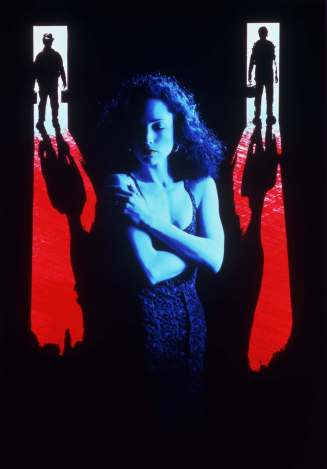