JUMANJI: WELCOME TO THE JUNGLE, the fourth most popular feature frolic of 2017, reignited the adventure game begun by the hit Robin Williams escapade from 1995, inspired by a children’s book written 14 earlier. The new version is an improvement. *

Four students on detention, stuck with cleaning their high school basement, stumble upon an ancient video game. Curiosity and boredom sees them fiddle with it, only to be vortex-yanked into its fantasy world as living human representatives of characters in the game. To get out—alive—they have to find a find a magic stone and break a curse. In their way are an array of people-hungry jungle creatures and the expected motley crew of bad guys. The troubled teens-turned-terrific travelers are played by Alex Wolff, Madison Iseman, Morgan Turner and Ser’Darius Blain, transformed by Jumanjified immersion into Dwayne Johnson, Jack Black, Karen Gilland and Kevin Hart. Nick Jonas joins them in the jungle as another entrapped good guy, and fave Bobby Cannavale has a field day as their most fiendish adversary. Everyone plays it for all its worth. Snobs can snort, but what’s wrong with a good-hearted, chuckle-strewn, madcap assortment of thrills & spills, ending with character—the human kind—rewarded, connections made and hope restored?  And a lotta bad guys clobbered. 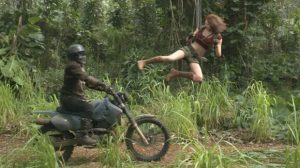 Q: “Why am I wearing this outfit in a jungle? Tiny, little shorts and a leather halter top. I mean, what is this?” A: that’s because the script was written by four guys—Chris McKenna, Erik Sommers, Jeff Pinkney and Scott Rosenberg. Directed to rocket by Jack Kasdan, with location work done at the Kualoa Ranch reserve on O’ahu in Hawaii. With Colin Hanks, Rhys Darby and Tim Matheson. 119 minutes. 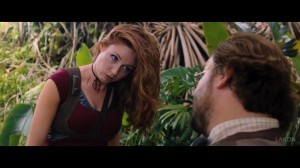 * Williams wild ride—a whammo #10 in ’95—no doubt has a nostalgic sheen for those who saw it as kids. I was 40 then and thought it was fitfully amusing, mostly thinking it would have been considerably more fun if I was 10.