SIMBA, from Britain in 1955, made a bloody splash at the time as the first movie “torn from the headlines” about the Mau Mau Uprising in Kenya, then a British Crown Colony. Well-reviewed at the time, today any mention of it is dutifully laden with the caveat that it’s one-sided, favoring the white residents claims over those of the black majority population from whom the complicated and costly rebellion arose. A movie from the Mother Country of the threatened settlers, about a revolt—ongoing in real time—in a prize colonial outpost of the shrinking British Empire–and we’re supposed to be surprised that it’s somewhat slanted? * 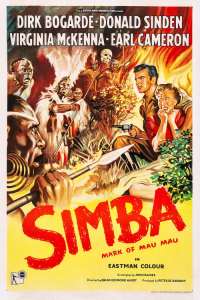 On return to the family farm in Kenya, ‘Alan Howard’ (Dirk Bogarde) finds his brother murdered by Mau Mau rebels, a faction led by whoever is ‘Simba’ (Swahili for lion or power). Alan’s distrust of and disgust with native Africans grows as attacks intensify, including one on the family of his sweetheart ‘Mary Crawford’ (Virginia McKenna). Her black colleague ‘Dr.Karanja’ (Earl Cameron) tries to counsel understanding, but neither side is ready for reconciliation. 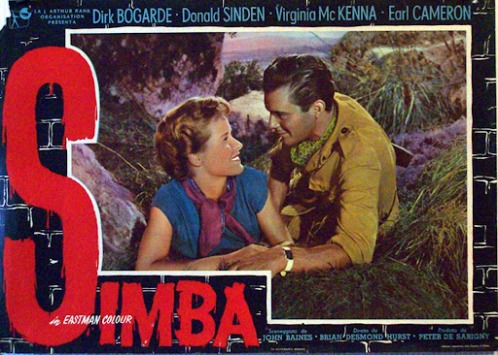 Compactly told at 95 minutes, the script makes a pass at airing pro-con arguments among the white colonials, but with the exception of the ‘educated’ doctor, it sidelines the black characters. The rebellion is simplified into a mindless eruption of savagery. The poster art gives a hint. Some 2nd-unit location work was done in Kenya, but most filming was on sets or rear-projections in England. Brian Desmond Hurst directed the action scenes and dramatic moments decently, and the cast deliver decent performances, though the Bogarde-McKenna romantic element is notably lackluster. **

* Though the script was written by John Baines and Robin Estridge, the treatment had been whipped up by 23-year-old Anthony Perry. He went to Kenya, was squired around the War Department, the Colonial Office and the Voice of Kenya, securing his vetting to represent their side of the story. Irony got in a smile when one of his Perry’s advisors, Charles Njonjo, a Kikuyu barrister, had been banished to England as a Mau Mau suspect. The punch line is that he became Jomo Kenyatta’s Attorney General when Kenya achieved independence eight years later. Njonjo lived to be 101. 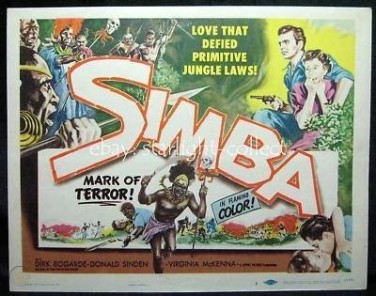 ** In her book “British Cinema of the 1950s: The Decline of Deference, author Sue Harper relates an anecdote where director Hurst was reprimanded for goading Bogarde’s passionless playing a love scene with McKenna “Dirk, could you look at Miss McKenna just once as if you’d like to f— her?”

On confused passions, then—next year, the insipid Safari would do little to clarify the conflict. 1957s Something Of Value was a bit of an improvement, as directed by Richard Brooks, taken from the best-selling novel by Robert Ruark. Beyond a few movies and novels (in 1962, Ruark added “Uhuru”), hindsight proved Truth was not only stranger than fiction, but worse, when time eventually revealed the official systematic cruelty employed to counter the revolt.