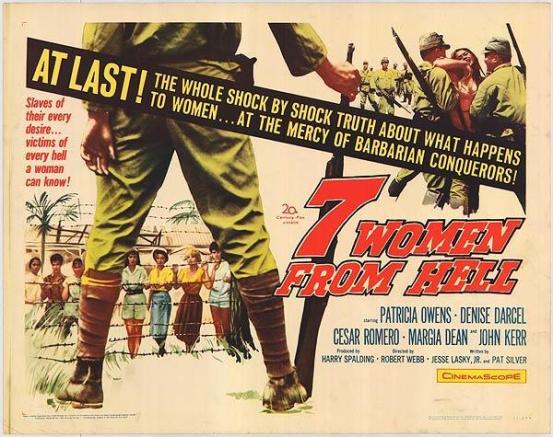 SEVEN WOMEN FROM HELL is…awful: climbing over stiff competition, this may be the worst movie released (“escaped”, as the joke goes) in 1961. A cheapie matchup of ‘women in prison’ exploitation camp and WW2 captivity saga, it was written by the husband-wife team Jesse Lasky Jr. & Pat Silver Lasky, presumably using crayons after a poolside lunch of cocktails, highballs and slings. *

1942. When the Japanese hit New Guinea, foreign civilians of various nationalities are placed in harsh prison camps. Among the internees are the seven women of the title, played (as opposed to acted) by Patricia Owens, Denise Darcel, Yvonne Craig, Pilar Seurat, Margia Dean, Sylvia Daneel and Evadne Baker. After a certain amount of abuse reducing seven to five, they escape into the jungle. During their trek, dodging the enemy, taking time to bathe in a handy lagoon, they encounter a wounded American pilot (John Kerr), then a suave German-born planter (Cesar Romero), who handily has a closet full of gowns they can change into. Oh, yeah, the war… 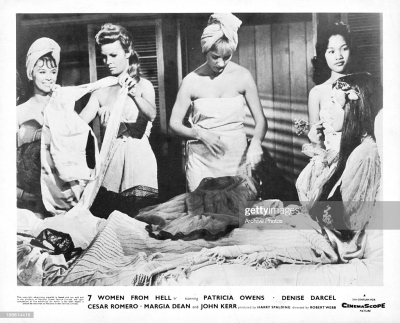 What a break the planter’s wife died and left us all these form-fitting dresses.

Robert D. Webb had directed some okay movies (I like the forgotten Seven Cities Of Gold), had logged a few box office hits (Beneath The 12-Mile Reef, Love Me Tender), plus boasted numerous solid credits as a 2nd-unit pro, but if there’s a smellier turkey on his resume than this buzzard, one shudders to stumble upon it. 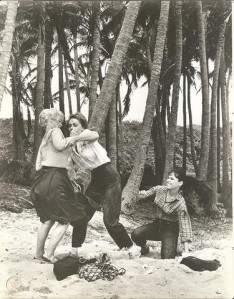 Granted a budget of $300,000 wasn’t going to allow scale, but Webb did have a vetted cinematographer in Floyd Crosby, and the money was enough to fly the gals and their tormentors over to Hawaii for location filming on Kaua’i. Why bother if you’re shooting in black & white? Color lacking in the background, it’s absent in every other aspect. The script is atrocious, the action sequences pitiful. None of the actresses fare well (Craig is terrible), Kerr seems embarrassed (rightfully) to be there, and Romero’s nonchalant polish just adds to the abject foolishness. * 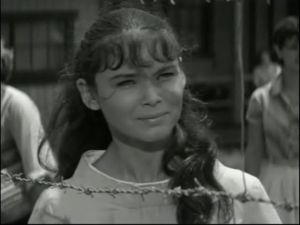 Assorted Japanese soldiers are played by the ever-persuasive Richard Loo (back being vicious as he was in 1944’s The Purple Heart), Yuki Shimoda (a sympathetic doctor), Lloyd Kino and Kam Fong (our pal ‘Chin Ho’ on Hawaii Five-O). 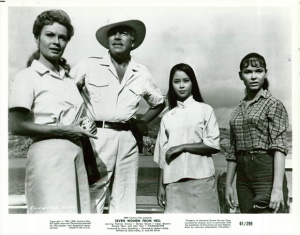 * The mini-genre of female civilians captured by Japan in WW2 provides three telling tales, all truth-based, each written, directed and acted with the intelligence, skill and sensitivity nowhere found in this clunker. See Three Came Home (Claudette Colbert, 1950), A Town Like Alice (Virginia McKenna, 1956) and Paradise Road (Glenn Close, 1997).

** Owens, 36 at the time, after choice roles in Sayonara, Island In The Sun and The Fly, saw her trajectory go-to-figurative-hell-in-handbasket. In 1959 she was a nurse captured by the Indochinese Commies of Five Gates To Hell. In 1960 she was a bar pickup doing a risqué striptease for a Saipan-bound Marine (Jeffrey Hunter) in Hell To Eternity. Finally, this lamentable junket to potboiler Hades in ’61. Hell To Eternity is worthwhile, Five Gates To Hell looks like a camp hoot. It can’t (?) be as lame as Seven Women From Hell.  Owens real-life ties to warfare were more interesting: her father, Arthur Owens, was a highly placed double-agent in WW2, working for both Britain and Germany, and mostly for himself. 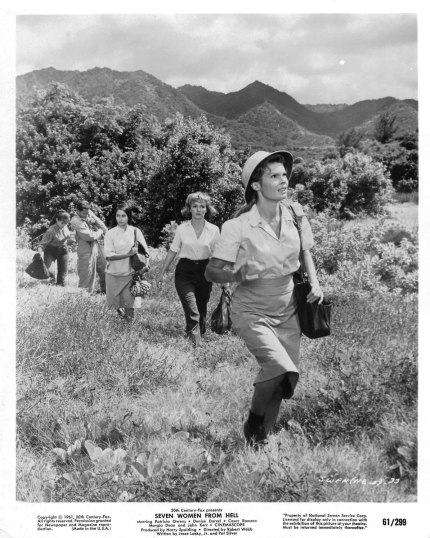