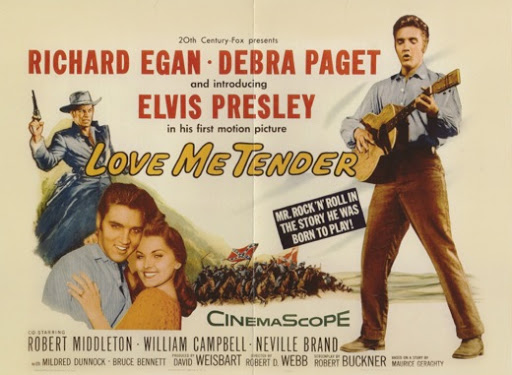 LOVE ME TENDER, introducing Elvis Presley to the big screen, was originally titled The Reno Brothers, more sensible given the history-stolen story, but the success of Presley’s hit song “Love Me Tender”, a few weeks after filming started, prompted the tie-in. Elvis sings it in the movie, the tune’s melody derived from the Civil War ballad “Aura Lea”. The story is set in the days right after the war ended in 1865. The three other numbers The King whipsaws in the fanciful 89-minute audience pander are raucous/rock-us pompadour cuts straight from 1956, complete with swivel hips. Historical accuracy gone to the hound dogs. * 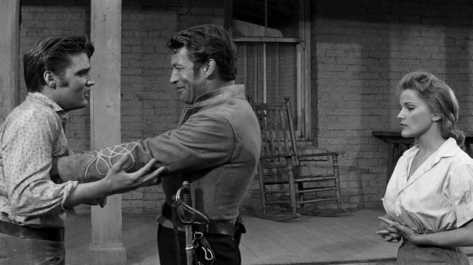 Louisiana, April,1865. A Rebel cavalry unit, led by a trio of brothers, robs payroll from a Yankee train, unaware the war has just ended. Told, they keep the money, and head home. ‘Vance Reno’ (Richard Egan) gets back to the family farm to find that his sweetheart ‘Cathy’ (Debra Paget), thinking him dead, has married kid brother ‘Clint’ (Elvis), who idolizes Vance. To avoid further family strain, Vance gallantly cedes to Clint, saying “We always wanted Cathy in the family” (just not in your bed, punk), and is about to head to California when Federal authorities come after the looted money. Loyalties are tested, tempers explode, pistols pulled. 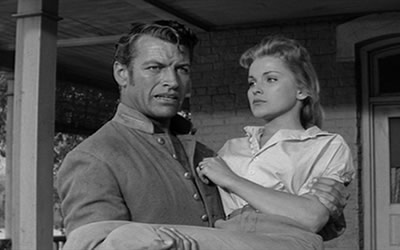 Truth is discarded, timelines scuttled, and the lowland contours of Louisiana and east Texas are equipped with rocky hills that look suspiciously like the Santa Susana Mountains west of Los Angeles. Hordes of howling Elvis fans ignored the trifling subjects of history and geography (just like in school) and attacked theaters with rebellious yells signaling a hit; the $1,200,000 package grossed $12,000,000, #20 for the year. 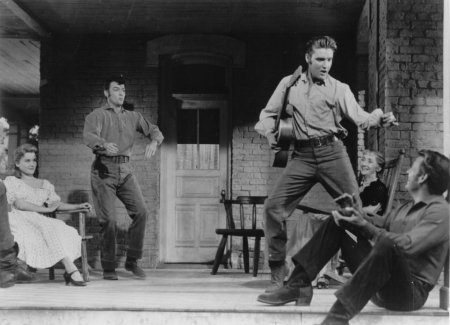 Apart from those dang-fool songs being a mere nine decades ahead of their era, and the overall plundering of fact in Robert Buckner’s screenplay, the cast do well enough, even if Robert D. Webb’s direction is uninspired. Literally learning on the job, with only some screen-tests under his belt, Elvis at 21 is raw but honest, and certainly energetic: he has a scene where, enraged, he shakes Paget and knocks her down, done with such jarring force it’s a wonder she didn’t get whiplash. It foreshadows all those lightning bursts of violent action he’d release steam on in nearly every movie he’d make afterwards. 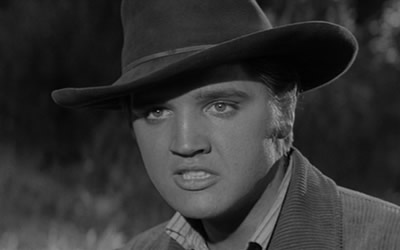 Presley was 3rd-billed after Egan and Paget, with supporting Reno’s ably covered by William Campbell (one of his rare times as a decent fella) and James Drury (looking natural on horseback, six years before becoming The Virginian).

* The real Reno Brothers were less than lovable or tender, their gang’s 4-year spree upsetting the postwar peace of Indiana, Missouri and Iowa (Louisiana someone else’s mischief market). Credit ’em with the first peacetime train holdups, jumping the guns on another clutch of ambitiously amoral brothers, the James’s and Youngers. The Reno clan’s reign had been fessed over the year before, to much less notice, in Rage at Dawn, with Randolph Scott, one of four he saddled up on in ’55. Scott fans seem to like it.

Though in that wild oats “display pain with anger” scene where Elvis shakes Debra hard enough to rattle her rolls, off-camera he was head-over-Paget for the petite (5’2″) and comely beauty. She was charmed as well, but was butterfly-pinned by serial starlet collector Howard Hughes. 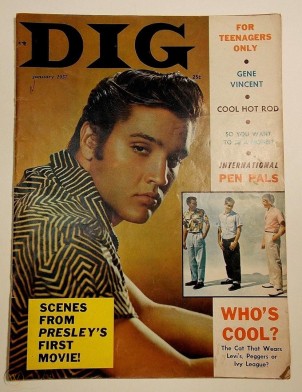 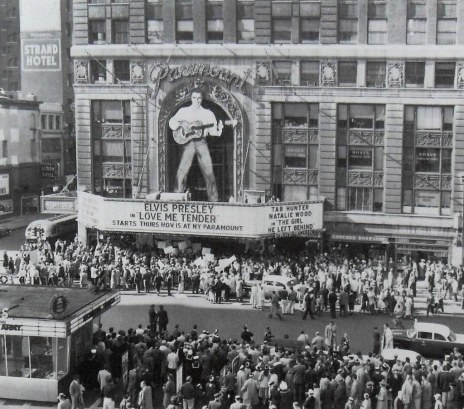