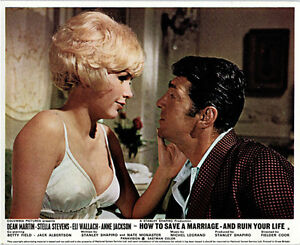 HOW TO SAVE A MARRIAGE AND RUIN YOUR LIFE, yet another gamely performed, lamely written comedy from 1968, ranked 51st at the boxoffice, grossing $7,100,000, enough to cover whatever it cost to make, but not sufficient to stick in the memory bin for anyone other than diligent reviewers hoping to steer you away from blowing another 102 minutes of your retirement. Thanks to the hard-working cast, it isn’t awful (lots of competitors that year), just bland. *

Attorney and confirmed bachelor ‘David Sloane’ (Dean Martin) believes his unhappily married friend ‘Harry Hunter’ (Eli Wallach) is making a huge mistake by having a mistress. He bets Harry he can prove it, and sets out to show that the lady in question is just a gold-digger.  David, pal that he is, woos Harry’s comely employee ‘Carol Corman’ (Stella Stevens), thinking she’s the right-wrong gal, but he’s made a mistake. Her next door neighbor ‘Muriel’ (Anne Jackson) is Harry’s actual paramour, and she’s sincere in her affection.  Lonely and honest, Carol falls for David, setting everyone up for a reckoning.

Trouble is, as written by Stanley Shapiro & Nate Monaster, with direction by Fielder Cook, it barely summons chuckles, let alone laughter. The whole spouse-cheating & identity-error schtick is an old standard, one that can be done either brightly, tastelessly, or in this case, flatly. Shapiro had a number of winning comedy credits (Pillow Talk the best), but the spark fizzles this time out. Martin and Stevens scored together two years earlier in The Silencers, and they give it a decent effort, while the real-life married couple of Wallach and Jackson go the extra mile as well, but the material is just too limp to inflate.

* Vietnam, riots, assassinations, and election of Nixon: 1968 wasn’t exactly choked with laughs, reflected in the numerous lame comedies that year. HTSAMARYL competed for shrugs or winces from The Impossible Years, With Six You Get Eggroll, Prudence And The Pill, Blackbeard’s Ghost, Where Were You When The Light’s Went Out?, The Secret War Of Harry Frigg, Speedway, How Sweet It Is!, The Wrecking Crew (Dino), The Private Navy Of Sgt. O’Farrell, Salt And Pepper, Stay Away Joe, Where Angels Go Trouble Follows (Stella Stevens–as a nun), Don’t Raise The Bridge–Lower The River, Skidoo, Inspector Clouseau…. 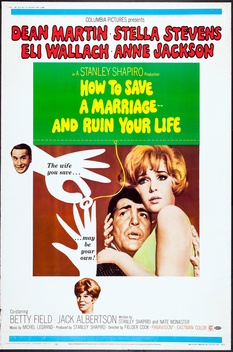