PIRATES OF THE CARIBBEAN: DEAD MEN TELL NO TALES need not have told this one, but why let a good thing die of natural causes when you can beat it to death? From 2017, the 5th voyage for Jack Sparrow & enemies came “Hard a-port!” with fans and critics, drawing broadsides of “Enough, already!” from reviewers and noticeably less treasure from the landlubbing mob. Still casually entertaining, thanks to the copious eye candy, Javier Bardem as the main threat and rewarding wrapups for three series mainstays.

Sparrow heads to the Devil’s Triangle where he battles dead-man-stalking ‘Armando Salazar’ (Bardem), a Spanish captain whose mission to scourge the sea of pirates was turned into a haunted ship with a ghost crew, giving Salazar a vengeance motive towards Jack. ‘Barbossa’ (Geoffrey Rush) joins with Jack and his mostly new crew, including a lady astronomer (Kaya Scodelario) and the grown son (Brenton Thwaites) of an old acquaintance. Impalings and explosions galore.

Also overkill, uninteresting secondary characters, and near incoherence. Attention drifts while you watch, then snaps back for an action scene before floating away again, remembering, like the characters, how much better things used to be.

Depp, Rush and a few glimpses of past players work with a change of hands at the tiller and in the rigging. The fresh-yields-stale approach has the direction a two-man job; this time the dueling was dual-done by the team of Joachim Rønning and Espen Sandberg (they’d scored with Max Manus: Man Of War and Kon-Tiki). Jeff Nathanson signed on to write the script. Geoff Zanelli came aboard to finesse the music score, and Paul Cameron took over cinematography from 4-timer Dariusz Wolski. 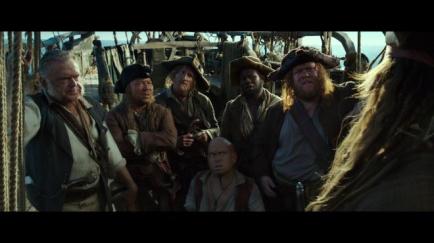 Bardem is always worth watching, the special effects are suitably grandiose, Barossa is given a proper sendoff and it’s hard not to get gooofily emotion-tugged when Orlando Bloom and Keira Knightley show up to tie the bow.