THE LOST BOYS terrorized an oddly populated California beach town in 1987, turning a new twist on vampirism into a summer hit that’s revealed long legs (or fangs): it has a huge following decades down the line. Your humble garlic-eater has to grudgingly cop to its popularity, as I’m not a fan. I recall liking it well enough 30+ years ago, but a recent peek left me looking for a coffin to hide in to shut out all the yelling and daffy haircuts. Since I watched it with two close friends who like it, I had to keep my stakes undriven, but they’re liberal Dems, so they obviously drink teenager blood anyway….

When their more-than-clueless divorced Mom drags them to seedy, freak-stoked ‘Santa Clara’ (played by Santa Cruz, CA), teen brothers ‘Michael’ (Jason Patric) and ‘Sam’ (Corey Haim) soon enough see what Mom is missing, namely that a pack of sneering vampire punks run wild over beach and boardwalk. Because he has immediate hots for a local chick, Michael (his name is spoken, whispered or shouted twice as much as Titanic‘s “Jack!” and “Rose!” combined) falls in with the hoods, led by Kiefer Sutherland (taking his thug from Stand By Me to the next logical level), while Sam wises up (kid version) and joins with a pair of pre-teen clowns to fight the vampers. 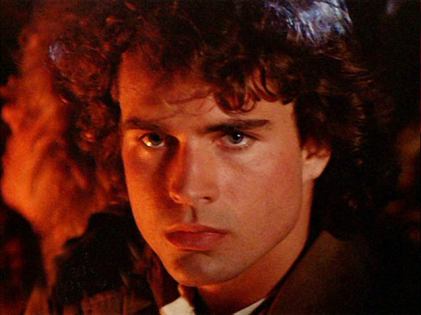 Patric (his second role) and Sutherland were both 19, Haim and Corey Feldman (the notorious Two Corey’s) were both 15, and on a roll. Perfirmance wise, Sutherland and Haim fare better than Patric (looking truly lost) or Feldman (find me a sledgehammer). Either good sports or just slumming, Dianne Wiest and Edward Herrmann are the ‘adults’, while Barnard Hughes plays a ‘Grandpa’ who’s supposed to be endearingly nutty but is really a blatant plea for mercy killing.

First-timers Janice Fischer and James Jeremias sold their script for $400,000 (civilization cracks slightly), then Jeffrey Boam was brought in to punch it up. Boam boasted decent credits (Straight Time, Indiana Jones and the Last Crusade) but this is a real groaner. Directed by Joel Schumacher, it does move apace and looks good, slickly photographed by Michael Chapman.

Made for $8,500,000, teen flocks saw that it flew away with $32,200,000. With Jamie Gertz, Jamison Newlander and Alex Winter (later non-vampire immortal as ‘Bill’ of Bill and Ted’s Excellent Adventure). Eternity with these posing pups and their he-dude hairstyles lasts 98 minutes.

Love it or shrug, ‘Boys‘ helped goose the all-powerful teen demographic to vampire items, soon be inhabited by a Buffy & a Bella, polishing off or moping over assorted plasma drainers and boyfriends.

Two desperate sequels, starring ever-charmless Feldman, emerged direct-to-DVD in 2008 and 2010: The Lost Boys: The Tribe and The Lost Boys: The Thirst. Considering the tragic career & life trajectory of Corey Haim and the less-than-stellar road travelled by his close friend Feldman, it’s difficult to miss the title irony of The Lost Boys.